Facing the future with new ideas

The gods must laugh, to see us scurrying around in our day-to-day activities, most of which make little difference from a grand perspective.

We’ve looked at how geologic forces shaped the Animas Valley. We’ve seen how settlers, from the Indians to the Europeans, have reshaped the land. We’ve considered how outside forces – wars, economics, weather, encroaching civilization – have affected and altered life in the Valley.

The future, as they say, is an open book. Are humans having a long-term detrimental effect on the earth? Will losing farmland and open space, and turning it into developments, golf courses, gravel pits, and fields of weeds, ruin the land forever? And if so, can we learn to prevent this and live in harmony with the land? What does that kind of world even look like?

Nelson Zink, in an interview about his efforts to return corn growing to prominence on the Taos Pueblo, put it this way: “Where does the West go now?”[1]

These are big, heady questions not answerable in one short chapter. But we can take a look and see what John and Ruby Zink’s children are doing with an eye on the future.

Nelson Zink and his friend Robert Mirabal, who grew up on the Taos Pueblo and became a renowned flautist and Grammy-winning musician, banded to create Tiwa Farms. Mirabal was raised doing the tribe’s traditional Corn Dances, but by the 2000s hardly anyone on the pueblo actually grew corn. He wanted to return to his roots.

At the time, Zink, who lives in Taos, had just lost his wife, artist Melissa Zink, after a long illness in 2009. With his upbringing at Waterfall Ranch, Nelson knew how to grow many crops, and is especially fond of corn.

They took the name Tiwa from the language of the Taos Pueblo, and began the task of helping puebloans plow their fields and grow the most native of American crops. Nelson even involved his brother in a small way. He needed farm machinery, and remembered the old 1950s-era tractor used at Waterfall.

“You still have that tractor?” Nelson asked Ed.

Ed answered yes, and even delivered the tractor to his brother. A mechanic in nearby Velarde, New Mexico, nursed it back to health. In return, Nelson gave Ed an Indian artifact that he’d found long ago at Waterfall Ranch: a stone that appears to be a fire starter.

With the tractor, dubbed Red Buffalo, Nelson and Robert in 2010 began plowing up long-neglected fields and helped the puebloan residents plant corn. They were joined by a third member, Stephen Parks, a Taos art gallery owner who had worked closely with Melissa Zink and sold her work. Nelson and Robert put together two books to help guide corn-planters, and Nelson started a blog to keep everyone up to date on progress.[2]

Jerry Zink’s main occupation for several decades has been blasting things with water. The business he started with John Wolgamott in the early 1980s is called StoneAge Engineering, and their “waterblast” technology is used worldwide for everything from drilling holes to cleaning industrial equipment. Jerry and John connected at Colorado Mines, where Jerry was a student and John was doing grad work.

Jerry and his wife, Karen, live in the Sunnyside area, not far from where both Jerry’s mother, Ruby Nelson, and Karen’s father, Merl Short, grew up as neighbors. Ruby was four years older than Merl, who was one of twelve siblings.

Jerry and Karen Short married in 1970, and lived for a time in the Golden area, outside Denver. They returned to the Durango area a few years after their daughters, Heidi and Holly, were born, and settled in the Sunnyside area – back to their roots, one could say.

The family had always kept at least a light hand in agriculture and ranching, raising corn, potatoes and cattle on 220 acres that were homesteaded in 1905 by Karen’s Short family ancestors. Then, in 2002, Holly and Jerry opened two new, joint ventures. The father-daughter team created Sunnyside Meats processing facility – filling a badly needed niche for local ranchers. Simultaneously, Holly opened Sunnyside Farms Market to sell the meat they process.

Sunnyside Farms is valued locally by restaurants and households for its grass-fed beef. Also, you’ll find at the Durango Farmers Market, and elsewhere, products raised by others on Sunnyside Farms or meat processed at Sunnyside Farms Market.

John Zink believed strongly in local agriculture, and had his hand in several projects to strengthen opportunities for area farmers. Ed Zink says his father “would be ecstatic about the Durango Farmers Market.” And, Anne Zink Putnam continues, “all the things Jerry is doing.”[3]

Jerry was inspired by his parents’ 1986 conservation easement, which is an agreement to never develop a parcel of land. In return, the easement creators get a tax break. Jerry and Karen have put their farmland into a conservation easement. In 1996 Jerry became a board member of La Plata Open Space Conservancy, which barters easements and sees that they are followed. As of 2017 Jerry is still on the board. 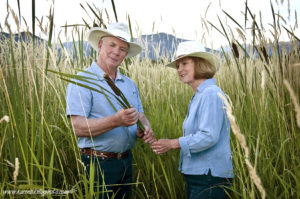 Cat tails are growing in abundance at the Animas River Wetlands that Ed and Patti Zink have re-created.

In the 1980s, the O’Neill family, well known in the Permian Basin of Texas for its oil holdings, bought 60 acres from John Zink on the east side of Highway 550, land that edges down to the Animas River. The Zinks kept “right of first refusal,” giving them a chance to buy the property should the O’Neills decide to sell it.

“We really didn’t want it developed, but we couldn’t really afford the price that was being asked, to just grow hay there,” Ed Zink says.[4]

Ed and Patti Zink started studying up on a concept called wetlands banking. They determined it was a possible solution, but it would be a lot of work, and might not recoup their huge land expense.

“We did some due diligence, threw the dice, and bought it,” Ed says. “And we started building wetlands.”

Animas River Wetlands was born, and the first dirt was moved in 2009. Basically, the Zinks create wetlands, and “sell” them to developers who are forced to take out wetlands in order to create their project. In this way, the net amount of wetlands stays even, and those concerned about the environment are reasonably happy.

Surprisingly, Ed says, their largest “customer” has been the highway department. As highways are widened, the state Department of Transportation is forced to take out wetlands. To mitigate the loss, it contracts with a group such as Animas River Wetlands. The developer pays the wetlands creator and gets a “certificate of mitigation” in return.[5]

There’s no template for building wetlands. It’s a lot like building a golf course, Zink says. You consider the land, the undulations, the hills and dales. Lowlands become swamps with willows, highlands become, for example, a stand of cottonwoods.

Falls Creek winds its way through the 60 acres, and the creek was altered to make it more crooked, lengthening it and creating more areas where water could gather. Ed and Patti and their employees planted cottonwoods and willows.

“Precisely what the shape is kind of evolves as I’m out there with my trackhoe,” Ed Zink says.[6]

There are many ways to measure success, but here is one. Thirty bird species were noted when they began creating wetlands in 2009, and ninety can be identified now.

Starting in a small way, perhaps a model for the future, Waterfall Ranch is coming full circle.

Edwin A. Zink died October 11, 2019, from complications of cardiac arrest. He was 71. A well-attended memorial service was held October 14 at Fort Lewis College’s Community Concert Hall.

Other tributes appeared on cycling websites and elsewhere. A sampling:

The five children of Ruby and John Zink gather on the second floor of the Durango Public Library around a sculpture by the late Melissa Zink, Nelson Zink’s wife. From left are Anne, Ed, Nelson, Ida, and Jerry (crouching).

[2] The self-published books are “Taos Pueblo Corn Grower’s Guide” and “Believe in the Corn: Manual for Puebloan Corn Growing.” The blog is at tiwafarms.blogspot.com