What a mix: Hunters, loud machines and bicycles 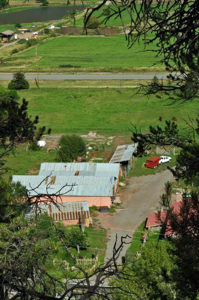 Waterfall Ranch morphed into a place to graze a couple dozen horses for an increasingly successful outfitting business that operated out of the ranch.

The Zinks took mostly out-of-staters on elk and deer hunting adventures in the nearby San Juan Mountains, mostly up Hermosa Creek. They worked with 75 to 80 clients per fall season at the height of the business.[1]

It was renowned enough that one of their clients in the mid-1980s was the recently named director of the state Division of Wildlife. Jim Roush had never been big-game hunting, thought he’d better give it a try so he knew what he was talking about, and asked around for a good guide.

“The agency recommended us, which we considered as a compliment,” Ed Zink says.

They were so good that the adventure didn’t last long. “He got an elk in about an hour and left,” Zink says. “He didn’t hang around. He was gone by noon the first day.”

In 1986 John and Ruby built a house across County Road 203 from the stone house and took up residency. He enticed son Ed into moving his family – a wife and three children – into the stone house.

“This will be perfect,” John told Ed. “I’m close enough to tell you what to do but I can go home and not have to do it myself.”

Ed is quick to point out that his father said this facetiously. John and Ruby never meddled in their children’s lives, never told them what paths they should take and what career moves to make. 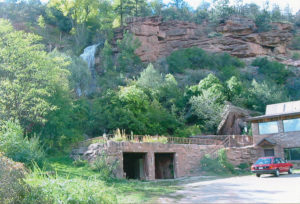 John and Ruby’s new house on the west side of County Road 203.

In February 1988, with their family, John and Ruby celebrated their 50th wedding anniversary. Later that year, now both in their early 70s, they made a trip to the Amazon.

Also later that year, John Zink was named the Durango Area Chamber Resort Association’s citizen of the year. He and Ruby were involved in several issues and causes, including the Durango Foundation for Educational Excellence. A DFEE fund was established in their names after John’s death from cancer in 1992.

More than 300 people attended John Wilson Zink’s funeral at the First United Methodist Church on a Tuesday afternoon in late March. The Rev. Darrel Hinshaw called John “a giant pine, magnificent and bold, who stood staunch against the sky, and all around shed beauty, grace and power.”[2]

The Durango Herald eulogized John as a person who “bridged many gaps. … He combines three qualities that are usually found, if at all, alone: common sense, imagination, and an interest in the betterment of the human condition.”[3] 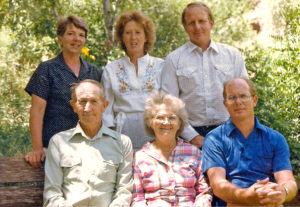 John and Ruby, with children Ida, Anne, Jerry and Ed.

The death September 20, 2004, of Ruby Zink, “an Animas Valley fixture and the matriarch of a well-known local clan,”[4] at age 88, was equally lamented.

“Ruby was a Christian through and through,” says son Jerry. “She was an optimist. She always made the best of things. Wanted the best for other people.”

Daughter-in-law Patti Zink says Ruby was generous, thoughtful and courteous. “I never heard her say a bad word about anybody.”[5]

The downtown shop kept Ed more than busy, and while it would be unfair to say Waterfall Ranch was neglected during his early reign, it would be fair to say that it wasn’t No. 1 on his priority list.

The Outdoorsman was first a general sporting goods store, with a large emphasis on hunting and fishing. For a while, ATVs, snowmobiles and motorbikes were sold in the back half of the store, until that business was moved to a more manageable location south of downtown and became Handlebar Cycles.

Non-motorized cycles, instead, gradually took over the Outdoorsman. Ed Zink in 1987 purchased a mail-order mountain bike business, the Fort Collins-based Mountain Bike Specialists, and moved it next door to Handlebar. The downtown shop, meanwhile, riding a wave and using some smart marketing, became a mecca for mountain biking. 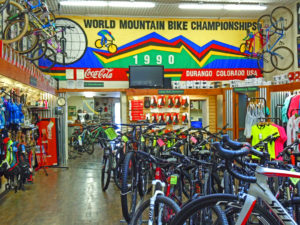 The Outdoorsman became Mountain Bike Specialists in the mid-1990s. A 1990 Worlds banner is still hung proudly in the store.

Ed in 1972 had co-founded the Iron Horse Bicycle Classic. It was a way to promote cycling and tourism at a relatively slow time – back then, the Durango & Silverton Narrow Gauge Railroad was just cranking up on Memorial Day weekend – and a way to showcase cycling in his store.

Mountain biking grew rapidly in popularity in the 1980s, and Durango’s fame as a place to ride grew with it. Durango hosted national championships three times in the late 1980s, then took on the daunting challenge of the first Mountain Bike World Championships sanctioned by cycling’s governing world body, Paris-based Union Cycliste Internationale. Ed Zink led Durango’s effort to procure the event for Durango, then found himself in the role of actually having to create an event from scratch.

That’s probably another story for another day, but the gist is this:

From 1986-2006, Ed was full up with things to do. For now Waterfall Ranch was doing fine as it was: the headquarters of Waterfall Ranch Outfitters, and a place to lay your head at night.

John W. Zink was named Citizen of the Year by the Durango Area Chamber Resort Association. (The association, called DACRA, is now known as the Durango Chamber of Commerce.) This was in 1987, he was 70 years old, and he couldn’t attend the awards banquet – he and Ruby were on the Amazon River.

This wasn’t the first time the Zink clan was noted for its civic involvement, and it wouldn’t be the last. 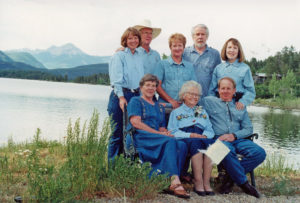 Ed Zink was named Citizen of the Year a couple of decades later, for 2004. Although his involvement as co-founder and longtime director of the Iron Horse Bicycle Classic was at the forefront of his community leadership, it was also noted at the awards banquet that he was on five boards of directors, a member of six organizations and a founding member of four others.[6]

“I grew up in one of the best places in the world,” an emotional Zink said in accepting the honor. “The only smart thing I did was stay here. … All I’ve done is have crazy ideas like people who have perfectly good cars should ride their bikes to Silverton.”

The entire clan was honored in April 2016 when the renowned Strater Hotel, built in 1887 in downtown Durango, dedicated Room 403 to The Zink Family. An excerpt from the story written in conjunction with the dedication:

“The traits and values that the Zink family has in common, those that seem to flow down through the generations, are like a long thread of community involvement which winds through the family, binding them together and to the fabric of life in La Plata County as well.

“The Zinks are leaders, hard working, innovative and inventive in everything they do. They enjoy moving on to ‘the next new thing.’ They volunteer. They are fearless, love the outdoors and are athletic. In fact, within the generations there have been wrestlers, track stars, tennis players, skiers, and baseball players. They have been ranchers, florists, teachers, nurses, midwives, entrepreneurs, outfitters, realtors, engineers, psychotherapists.

“They have always valued the positive side of growth while recognizing that it must be done conscientiously. They have conceived of and implemented many programs to protect the area’s water and natural beauty. These efforts have positively affected and driven growth in La Plata County while enhancing the county’s social and economic growth.”[7]

One more honor is pending as of early 2017. Waterfall Ranch is about to become a Colorado Centennial Farm. The program was created in 1986 to recognize agriculture’s role in the state’s development. Only farms and ranches that stay in a family for a hundred years are eligible.

[7] Posted on strater.com website. Story written by Esther Greenfield in conjunction with the dedication.