Thanks for linking to the Waterfall Ranch history page. 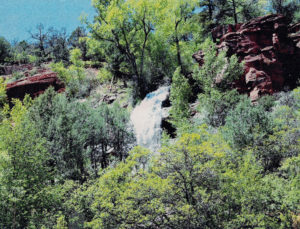 You’ll find a lot here, beginning with the history of the land from a geologic perspective. You’ll find gobs of information and stories about the ancestors whose offspring would eventually make the Waterfall Ranch their home. That includes the Zinks, the Dickersons, the Nelsons, the Egglestons, and many others. (For easy reference, it might help to consult the family tree. And for a graphic look at the families’ movement westward, check out this map. For a quick look at key events, see the timeline.)

And once they settled in the Animas Valley, on the ranch underneath the beautiful waterfall, how did they survive? What troubles befell them? What victories did they claim? How did the Zink clan remain and thrive at Waterfall Ranch for a century?

To make it easy for you to navigate this site, we’ve organized the stories into eight chapters. Find the person, the incident or the era you want to read about, click, and enjoy the photo-illustrated text. You’ll be entertained, and, whether you’re a Zink or longtime resident or even a newcomer to Southwest Colorado, you may just learn something about where you’re living. And where you came from …

Geologic times: The deep, deep history of how the land formed

The Geologic history, by Jerry Zink

pre-1917: Waterfall Ranch, those who came before – the Utes and then the white settlers

The long reign of the Native Americans

Aftermath of the shootout, and new ranch owners

Zink and Nelson family histories up to 1917: their paths to Waterfall Ranch

The Mayflower, a rough winter

The Zink line, from Gottlieb to James W.

The Nelsons: Swedish pipeline to Colorado

The Egglestons: Erie Canal to Thousand Islands to Oak Dell

John James Zink‘s life from birth to the Animas Valley

E. Ruby Nelson and the Sunnyside of life

Return from the Northwest – a growing ranch and family

Potatoes. It’s all about the spuds

Valley Voices – the Billings family, and others

The bike shop, the outfitting business, and new tenants at Waterfall Ranch

2006-present: Using lessons from the past

An ode to the waterfall itself, by Anne Zink Putnam

A History of the Waterfall Ranch, by Howard Zink

A tribute to Aunt Zelma, by Anne Zink Putnam

Rainbow Springs, and the fish business, by Anne Zink Putnam