Despite what must have been a rough beginning, a stint as a Civil War soldier and the death of his young wife, Albert Dickerson managed to take advantage of every opportunity and made for himself a very successful life. He was on the forefront of the country’s westward expansion and took a leading role, politically as well as geographically. 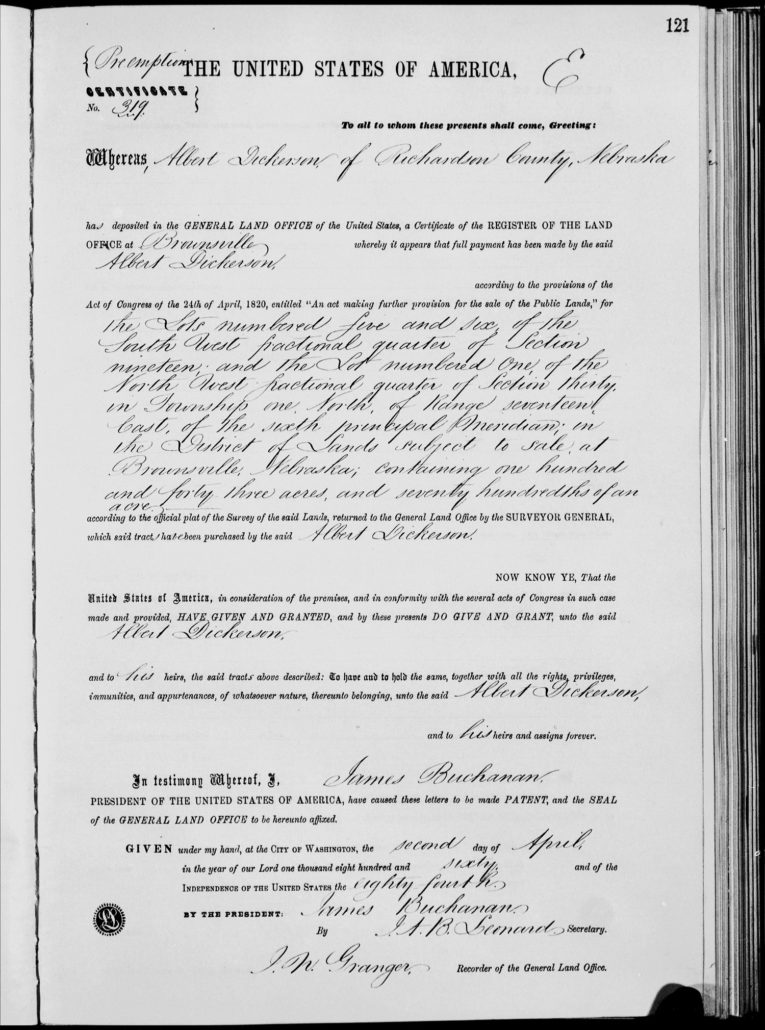 Albert Dickerson was born in 1835 in Tompkinsville, Kentucky, a small town just a few miles north of the Tennessee border. Family trees show that his father was Solomon Dickerson (1754-1843), but genetic testing indicates that Solomon was not his biological father.

Albert’s true mother, Sarah Jenkins (1805-1877), apparently married Solomon when Albert was a small child. Solomon by then was an aging Revolutionary War veteran, who served on the Maryland line as a private in the late 1770s. Solomon died when Albert was 7, but this couldn’t have been a great shock. Solomon was 89, a mere 51 years older than his widow, Sarah.

U.S. Census records indicate Sarah got remarried three years after Solomon’s death to a man named James Campbell, only four years her senior. They lived in Pope, in far southern Illinois, in 1850, and then it becomes a little unclear what happened to Sarah and James’ relationship. In 1860 both Albert Dickerson and his mother, now going by Sarah Campbell, were in Falls City, in the very southeastern corner of Nebraska. The household was a trio, the third being a 40-year-old black laborer named Moses Campbell. Solomon owned slaves – three in 1830, the census shows – so perhaps Moses was a former family slave. Moses was not a slave in 1860; his estate was valued at $250. (Nebraska Territory had still not decided the slavery issue before the Civil War.)

We mentioned that Albert made the most of his opportunities. One of his first big moves was using an 1820 federal act (the Homestead Act would come in 1862) to claim a 143-acre parcel of land in Falls City in the untamed Nebraska Territory. The claim is dated April 2, 1860.[1]

The Civil War and the Indian boy

In 1861 Albert married fellow Kentucky native Hannah “Eliza” Robinson. They had a son, and that’s when the Civil War came along. Albert volunteered in October 1862, enlisted as a corporal in Nebraska’s Second Cavalry, Company G, and completed his service in December 1863.[2] During that period he was part of a regiment that battled with Indians in the Wyoming-Nebraska area, according to John W. Zink’s written account. “Family stories have it that he once saved an Indian boy from being killed by the soldiers, and raised the boy to adulthood,” John wrote.[3] 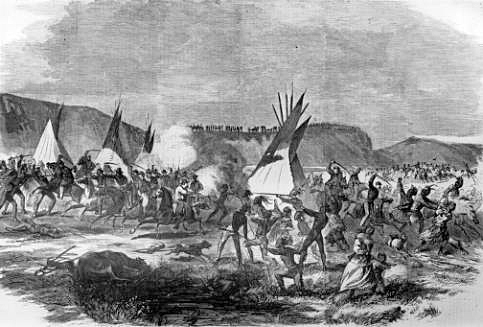 The battle of White Stone Hill, photo from National Archives.

More details, courtesy of Jerry Zink:[4] Apparently Albert’s cavalry unit was ordered to fight (basically, wipe out) an Indian village. After the skirmish a young Indian boy was found alive, and an officer ordered Albert to shoot him. Albert refused, and another solider was given the same order. At that point Albert went and shielded the Indian boy with his body. The boy, obviously scared, decided it was time to fight back, and he kicked and clawed at Albert, tearing his uniform and ripping off buttons. But Albert achieved his goal: The officer told Albert to take the boy and leave. Albert, and apparently Hannah, then raised the Indian boy, who, incidentally, doesn’t turn up in any official records or other family documents. True story or myth? You decide.

What we can surmise is that Albert was in the middle of Indian skirmishes in what was then considered part of the Dakotas. Nebraska’s Second Cavalry took part in a well-documented conflict, the Battle of White Stone Hill, on September 3-5, 1863, in what is now North Dakota. Federal soldiers numbered about 1,200, Indian warriors around 1,500, according to a report by Brigadier Gen. Alfred Sully.[5] While about 20 federal soldiers died, approximately 200 Indians lost their lives, including women and children. From Sully’s report:

“During the engagement, for some time, the Second Nebraska, afoot and armed with rifles (and there are among them probably some of the best shots in the world), were engaged with the enemy at a distance not over 60 paces, pouring on them a murderous fire in the ravine where the enemy were posted. The slaughter, therefore, must have been immense. …

“In conclusion, I would state that the troops of my command conducted themselves well; and though it was the first fight that nearly all of them had ever been in, they showed that they are of the right material.”

Albert’s service ended a few months later, and he returned to Nebraska, where he and Eliza had several more offspring. But she died in 1874, leaving her husband with four living children. 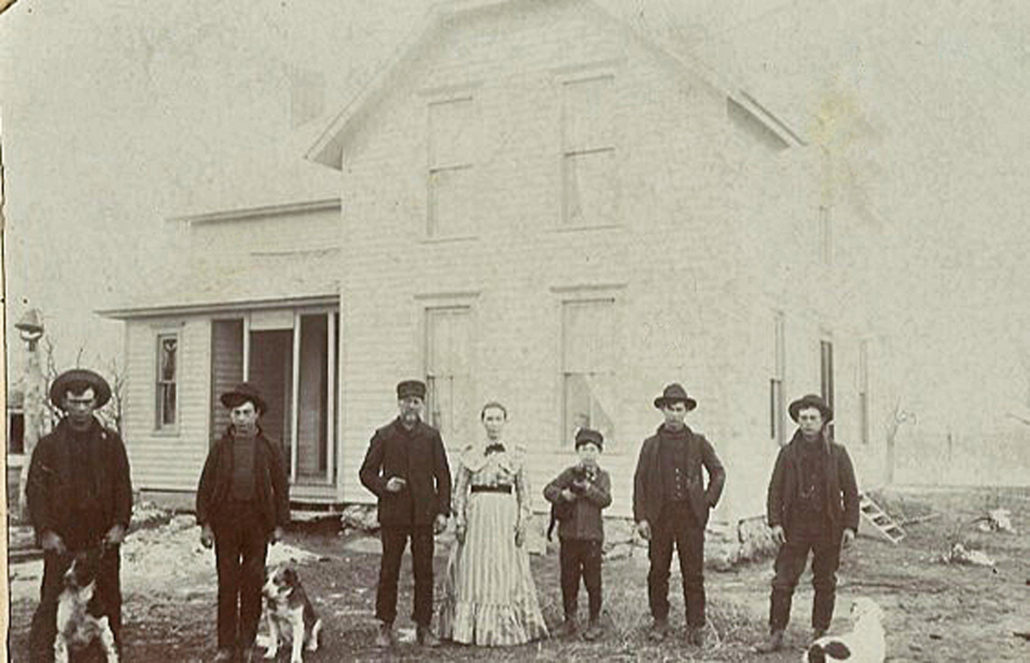 Albert and Anna Elizabeth Glick Dickerson, with sons, from left, John, George, Eddie, Charlie, and Will. Circa 1900

Anna’s Glick ancestors originally left Germany in the 1700s and were co-founders of the German Brethren faith in America. Anna Elizabeth Glick was born in 1856 in Ogle County, in northwestern Illinois. As a small child she moved with her family to southeastern Missouri, then sometime in the 1860s the family moved to Falls City, Richardson County, in far southeastern Nebraska.

Anna was about to turn 20 when she married Albert. You need labor to run a farm, so Albert must have been thinking, “Why not have a few more kids?” Seven of Anna’s eight children survived infancy, including six boys.[6]

Anna’s first child was born in Nebraska in 1877. Her second and third children came together, as twins, and they were Ida and William. Ida, later to marry John J. Zink, was the lone surviving girl.The twins were born in 1880 in Falls City or Litchfield or even Loup City. (Sources differ.)

The family stayed in Falls City for a while, but sometime between spring 1884 and spring 1886 the Dickersons migrated to Sherman County, in central Nebraska almost due north of Kearney.[7]

“Mrs. Dickerson came to this county many years ago and was amongst the first settlers to establish their homes in this community,”read a line from Anna’s 1927 obituary in the Sherman County (Nebr.) Times.[8]

Albert claimed two 160-acre parcels under the Homestead Act near Litchfield, one in 1890 and one in 1896.[9] The family ended up with several parcels in Litchfield along the Chicago Burlington & Quincy Railroad, which was built by the Union Pacific in 1886 and opened up the area for mass production. To help populate the area and create shipping business, the railroad offered package deals, which included land and moving expenses. The Dickersons’ several parcels of land can be seen on a 1920 map; they’re just northwest of the town of Litchfield, and straddle the railroad.

It seems timely to throw in a little Nebraska history here, because it undoubtedly had a huge effect on the Dickerson family.

Nebraska Territory became the 37th state in 1867. By the 1860s the U.S. government had pushed out many of the native tribes and opened the land to settlement by its citizens. The Homestead Act, under which a person could claim a 160-acre parcel by settling it for five years, was much-utilized in Nebraska.

Also in 1867 the town of Lancaster was renamed Lincoln, after the recently assassinated president, and was made the state capital.

According to history from the Nebraska legislature’s Bluebook, “Beginning in 1873, a combination of problems slowed the state’s growth and development. Between 1874 and 1877, swarms of grasshoppers severely damaged farmers’ oat, barley, corn and wheat crops. Discouraged, many settlers left their land and returned to the East.”[10]

Albert, a successful farmer and stockman, was not discouraged. He stayed on. New settlers came in waves in the 1880s, and many from Europe – notably Germans, Czechs, and others.

More from the Bluebook: “Nebraska settlers were tested by falling land prices in the 1890s. Land prices, which had soared during the 1880s, collapsed in 1890 because of drought, overuse of credit and low prices for farmers’ products.” 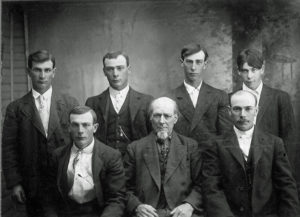 Albert Dickerson and his six sons, probably around 1920. (Ida, not pictured, was his only daughter with Anna who survived early childhood.) Top row: Charlie, George, Ernest, and Ed. Bottom row: Will, Albert, and John.

Albert, running as a Populist, in 1890 was voted into the Nebraska legislature as a member of the House. (Nebraska now has a unicameral legislature, but it was bicameral then.) Lest you think politics wasn’t a blood sport in the late 19th century, consider this from a history book on Sherman County politics:

“The past campaign (of 1890) has been the cause of no little ill feeling. It made many who were fast friends sworn enemies to each other; it has made members of the same church cold and distant to one another; and even caused considerable quarreling in many homes among parents and children.”[11]

Albert was a gifted speaker, while James (Jim) was quieter, Howard Zink wrote.[14] Albert reported that the only thing he ever heard Jim say in the legislative sessions was, “It’s time to tie up the horses for lunch,” when the time for lunch break was long past.

Their political tie led to the marriage of their children. On March 20, 1901, Ida May Dickerson and John James Zink were married in Loup City, Sherman County, the record shows. The young couple stuck around central Nebraska until 1910, when John J.[15] took the money he’d made from some shrewd land deals and headed to Animas City, Colorado, and made more shrewd land deals.

Albert and Anna visited their daughter at least once in Animas City in 1910. It wasn’t a fun time to remember, as Anna was accidentally shot and nearly died. (See Anna Dickerson’s story for more details.) It’s possible Albert and Anna saw Waterfall Ranch after John and Ida bought it and moved in, but there’s no record of that. Several children of one of Ida’s brothers appear in an early 1920s photo at Waterfall Ranch.

[5] The War of the Rebellion, a compilation of the official records of the Union and Confederate Armies, Series I, Volume 22, Part I, Chapter XXXIV, pp. 557-560. Sully wrote the report Sept. 11, 1863, at the mouth of the Little Cheyenne River. (For more on the Nebraska Second Cavalry, see The Second Nebraska’s Campaign Against the Sioux, edited by Richard D. Rowen, 1963.)

[6] The 1900 Census gives Anna Dickerson credit for eight children, seven living, but then lists eight living children. A mystery. The answer could be that Mary S. Dickerson, supposedly age 17, was erroneously listed. Most sources have her death coming at 3 days old. Perhaps the Census taker got a list of Anna’s children’s birthdates and went by that.)

[7] Assumed from birthplaces of Dickerson children.

[15] John James Zink will often be referred to in this narrative as John J., to distinguish between him and his son, John Wilson Zink, who will be referred to as John W.