Supposedly weighing in at 12 pounds, John Wilson Zink entered this world on December 12, 1916. He was born in Hermosa, at what was called the “Dudley Ranch” after its former owners.

He was the third boy in the family but, obviously, the first to get his father’s name. The perhaps apocryphal story is that his father picked the name John, thinking that his son’s well-above-average birth weight indicated he would turn into a big, strapping man, such as John James Zink was. 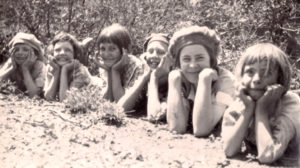 The girls of Waterfall School, 1925-26 academic year. Blanche Zink is third from the right. Other names are a bit sketchy: Viola Alexander is third from left, then Blanche, Lilaa Frizell and Violella Frizell.

And there are two theories about the middle name, Wilson. Was it to honor the current president, Woodrow Wilson, or was it simply passed down from John James’ father, James Wilson Zink? You can make a case either way, including the argument that John James was a good Democrat and Woodrow Wilson supporter. Maybe parents John J. and Ida used both those reasons.[1]

When a small lad, John W. fell into the Animas Ditch above where it crosses the road (now County Road 203) north of Falls Creek. He was swept downstream and under the road until he managed to save himself by catching the boards of the wooden culvert. He pulled himself upright and peeked up through a hole in the broken culvert, so that a passing motorist would have seen a head sticking up in the middle of the road. A disaster was averted.[2]

Ida had two more boys – Ernest in 1918, and Howard in 1923 – both born at Waterfall Ranch. As previously mentioned, John J. and Ida had purchased Waterfall Ranch in 1917, and moved into the new stone house in 1921. 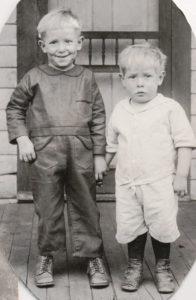 John Wilson Zink turned out to be the smallest of the five sons. But he was strong, tough, and he was fast. He undoubtedly started farming chores at an early age. Ida May would gather all the children big enough to hoe, and as she started down a row she would begin telling a story. The kids would have to hoe quickly to keep up and not miss the story. “She was a great storyteller,” John W. wrote in a memoir, “and we were always begging her to tell and retell our favorites. As I remember, all her stories had tragic or near tragic endings, and I have to feel that she must have been an insecure person.”[3]

Ida taught her children to be distrustful of strangers, particularly non-Caucasians. One day a railroad work car passed down the tracks with a Japanese crew aboard, and John W. bravely decided not to hide. He expected them to jump off and chase him. Instead, they smiled and waved. Another time the kids heard that Indians were coming up the valley and they fled to the cellar, where they remained trapped by their fright for hours.[4] 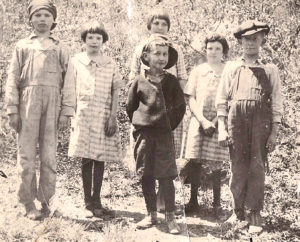 John W. Zink, far right, with classmates at Waterfall School during the 1925-26 academic year. In the middle is Lincoln Perkins, with Viola Alexander standing behind him.

John W. began attending Waterfall school, but he remained very attached to his mother. By his own account, if she went to a neighbor’s or to town, he would make a “terrible scene.”

“I do not remember as much as I would like about my mother,” John W. wrote. “She was rather small and slim, with brown hair and eyes. … I don’t remember mother ever physically punishing me, but she was rather strict. Her whole life was her family, and, like most mothers she was always busy and overworked.”

When John was about 7, his father bought a flock of sheep, and from then on, he wrote, “herding and feeding sheep was my life, aside from school.”[5]

It was about that time, in March 1923, that John J. Zink purchased the Kerr ranch, which included an orchard and farm at Hermosa, for $11,000.[6] Thomas and Belle Kerr had bought the land in 1883 and built a beautiful, two-story house there in 1884 for their family of six children. Belle died in a wagon accident in 1892. Thomas remarried, then died in 1918 from injuries in an auto accident suffered on a return trip from Electra Lake.[7] John J. bought the ranch from Thomas’s second wife, Mary. Among other things, including orchard fruits, the Zink grew potatoes there.

The science of agriculture, at least from a modern perspective, was in its infancy. But it was well established that you didn’t want to plant seed potatoes before the last spring frost if you could help it, and the soil should be moist and soft enough that you could work it. Here was Ida’s method of determining the right time to plant, according to John W.: She’d have a couple of her young kids go out and sit in the field that was to be planted. If they sat on the bare ground and didn’t complain about how cold it was on their butts, well, it was time to plant.[8] 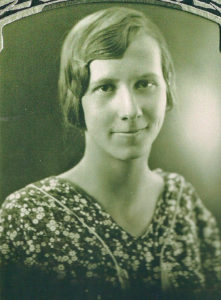 Early in John W.’s life, Ida’s health began to fail. She fell sick in late 1925, just after John turned 9. After two weeks it was thought she might be improving, but Ida May Dickerson Zink died suddenly on the second day of January, 1926.[9] The newspaper said she died of heart trouble, although the word passed down was the cause was uremic poisoning, or acute kidney failure.

That, of course, put a huge burden on John James Zink. He shifted some of the child-rearing burden to 11-year-old daughter Blanche, who cooked for and looked after her three youngest brothers, ages 9, 7 and 2. It couldn’t have been easy for young Blanche, but by all accounts she accepted her role admirably, and was never bitter.

John James, meanwhile, was struggling. His property investments in town took a hit when the Great Depression came in 1929. His renters couldn’t pay, John J. couldn’t make his payments, and he lost many properties. Although his tuberculosis was gone, now bleeding ulcers beset him. According to Howard’s account, the ulcers nearly killed John J., but he managed to recover.

The Zink boys, for recreation, went fishing, sometimes at Electra Lake, where John J. Zink had become a member. For extra cash the boys would trap varmints – skunks, muskrats and others found on the ranch. John W. told the Durango Herald for a 1958 story on the family that one record season his share of the pelts added up to $100.

On their way to Waterfall school, Howard recalled in a story he dubbed “at least partly true,” he, Ernest and John would check their skunk traps. Their efforts were at least partly successful, and they arrived at school with a whiff of odor to their clothing. The teacher figured there must be a family of skunks living under the one-room schoolhouse, and contacted the school administration about the problem. Just then the potato harvest began, John J. kept the boys home to help, and the teacher, noting the air had cleared at the schoolroom, called off skunk eradication procedures.

At high school, John W. discovered he was an excellent runner. In 1933 at an all-Basin track meet, he shattered the Durango High School record in the half-mile by 3.5 seconds, running an impressive 2 minutes, 4.5 seconds. John’s records in the half-mile and mile would stand for nearly three decades, until future Olympian Mike Elliott bested them in the early 1960s. John W. was motivated to excel at whatever he did, his brother Howard recalled.

Meanwhile, John J. remarried twice, perhaps to provide a mother for his four remaining kids. (By 1930, Leonard, Zelma, Ruth and Albert had left the fold.) Neither lasted long. In March 1930 he married Pansy Widner, and that lasted only months. In June 1932 he married Nora Leatherman, and that apparently lasted until at least 1940, because she appears on Census records as residing with John J. and Howard at 1151 East Second Ave. 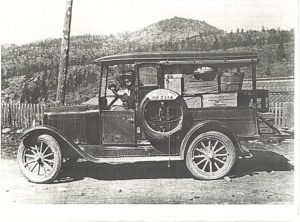 Leonard Zink farmed in Hermosa and with his wife Laura started a nursery.

If you’re keeping track of Waterfall Ranch, it gets a little interesting around this time. John J., Nora and Howard moved to town around 1934. John W. Zink had graduated high school, and in the summer of 1932 Ernest, after having “visions” that he believed were God calling him to be a preacher, ran off. He was just 13. Ultimately he found a little church academy in Hutchinson, Kansas, and remained for several years.

Meanwhile, back at the ranch, the LaLondes, Alec and his wife, Clara, were living at the stone house and overseeing the goings-on, probably in much of the late 1930s. Alec and Clara’s daughter, Arleene, had married Albert Zink on April 12, 1933.

But back to John W. Zink. At some point after he graduated from Durango High School in 1934, he went to work for his oldest brother, Leonard, who lived in the Hermosa area with his wife, Laura, and ran the Hermosa Nursery. And that takes us to the next part of our story, because John W. met someone very special at Hermosa Nursery.

[7] From information supplied by Marie Roessler during tour organized by the La Plata County Historic Preservation Review Commission, May 20, 2017.