Why did John J. and Ida buy the Waterfall Ranch? Maybe the simple reason was that their family just wouldn’t stop growing.

Around 1912 or so, the couple moved the family from Animas City to the Animas Valley near Hermosa, to “the Dudley place,” as Ruth Zink Duncan referred to it,[1] or “the Knapp house,” as it later became known. Ida Blanche was born in 1914, and a sixth child, John Wilson Zink, followed on December 12, 1916.

It was a houseful.

John James Zink could spot a good land deal a long way off, and Waterfall Ranch was just a couple miles down the road. Easy pickin’s.

A few months later the Zink clan moved in to the frame ranch house near the waterfall on the west side of the road, just north of Falls Creek. It was then known as the “Wigglesworth homestead.” 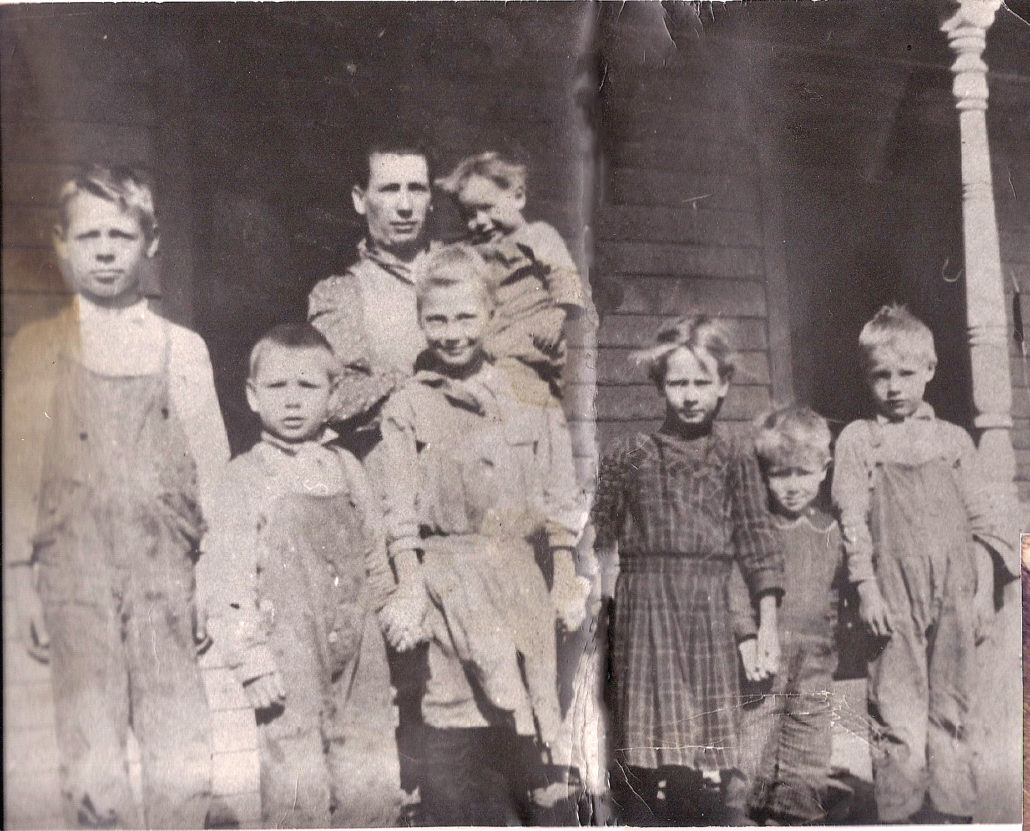 Ida is holding Ernest. Blanche is in the plaid dress, John W. next to her. Others are Dickerson cousins. This photo was taken in late 1919 or 1920.

Says Howard Zink in his written history, “When John J. and Ida moved, there must have been six kids at home – soon to be another, Ernest. No wonder that dad wanted a bigger house.”[3]

So the family moved in, probably, in the spring of 1918. America’s involvement in World War I was now intense in France, Belgium and Germany, but fortunately none of the Zink clan, other than possibly John J., was the right age to fight. Plus, John was now a serious farmer, and the country needed to be fed. John J. did register for the military in September 1918, but the war ended in November. Leonard, the eldest, was just 15, too young to register. But just as great a scare was the flu epidemic of 1918-19 that was reaching La Plata County and killing off previously healthy adults as well as kids. Fortunately it never claimed any Zinks, although it ravaged many other families, particularly those in Silverton. Perhaps the rural isolation helped, or just good luck.

In any case, the epidemic shut down schools. After giving birth to Ernest on November 2, 1918, on the Wigglesworth homestead, Ida got blood poisoning, and an abscess in her side had to be surgically removed. Due to this, or perhaps other reasons, her health began to decline.[4]

Meanwhile, Zelma, now 12 or 13, developed a bad case of rheumatism that landed her in the hospital. With Ida and Zelma unable to take care of Ernest, a neighbor lady, Mrs. Teal, took the infant to her home.[5]

Things temporarily got even worse. Young John W. got sick, and Mrs. Pryor came one night, through deep snow, with frozen feet, to help take care of him; she took John W. home with her. Ruth recalled, “Next day, Mrs. Teal got sick, and we had to go get Ernest. I, Ruth, was 11 years old trying to take care of that tiny baby and he was sick. God undertook for our family, we all made it. Soon after mother got home, Ernest was doing much better, Zelma much better, but was troubled with rheumatism all of her life.”

Leonard was in school in Durango, boarding there. He became very sick with the flu but also survived. The influenza struck Zelma and Ruth in the spring of 1919, but “it was not nearly as hard,” Ruth said.

The rest of the family escaped.

John J. planted the field east of the railroad tracks and north of the lane in potatoes. Also at that time a potato cellar was built on the west side of the road. In 1919, and maybe in 1918 and 1920 as well, the potato crop was bountiful. “No piece of ground had a crop like that again,” Ruth wrote.[6] Plus, prices surged up to 11 cents, an amount unheard of in those days. War shortages had spurred prices up.

The result was that John J. made a tidy profit.

“John Zinc (sic) was in town yesterday,” the Weekly Democrat related to its August 20, 1920, readers. He had nine acres in potatoes, with vines covering the ground. Last year he produced 200 bushels per acre and netted $400 per acre.[7]

The windfall made it possible to create what would become the centerpiece of the ranch. 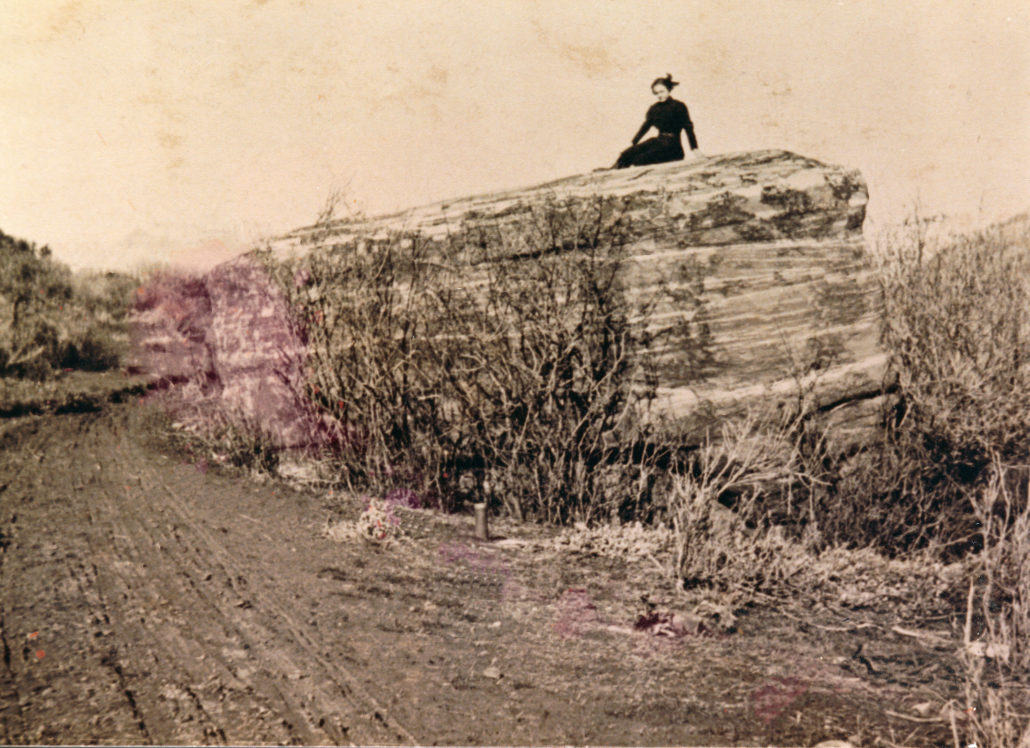 This rock, which once split the road running past Waterfall Ranch, was blasted and used in construction of the stone house.

A huge sandstone boulder, present “from time immemorial,” according to one account, forced north-south traffic to split around it on the increasingly busy road that made its way through the ranch.

John J. Zink, who’d grown up on the sandy loam of rock-scarce Nebraska, was fascinated with that big rock. And it gave him an idea.

Why not use the rock to build the new home he’d been dreaming of creating?

John J. linked up with the Cummins brothers, master stone masons, to teach him the techniques he’d need. He then contracted with Jack McKinnon of Ignacio to build the house from rock quarried on his land.[8] The big boulder was blasted apart, pieces worked into shape, and construction begun.

Three stone masons toiled on the project, Ruth wrote. It was the summer of 1921. 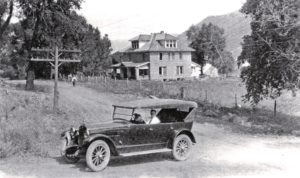 The original Waterfall Ranch house, built in 1921. The car’s driver is unidentified, but is possibly Leonard Zink.

“Build the house well, they did,” reported the Durango Herald-News in 1958. “The present eight-room full attic and full basement structure is just as substantial now as the day it was built.”[9]

The two-story house was heated by a coal furnace that lasted forty years. It had electricity and running water. John built a 20-by-60-foot retaining pond 5 feet deep on the mesa above the valley and piped water downhill to a power house, where a Pelton undershot water wheel generated 2.5 kilowatts of power. The same source piped water into the house and barn.

“It was probably the finest home in the valley,” wrote Howard Zink, who was born there in 1923.

“Father always wanted the Waterfall to be a landmark,” wrote Ruth Zink, 13 when construction began. “In those days, the stone house was built for something around $12,000. Oh! to think what it would cost now.”

Of course, the construction work was far from easy, and it took a toll on John J.

“It was a long, hard job,” Ruth wrote. “Father mashed a little finger handling stone, a year later had blood poison and lost the finger. When he got out of the hospital, he went to San Diego, California, to visit Grandpa (Jim) Zink and recuperate.”[10]

Some neighbors wanted to share in the comforts of the new Zink home, including a Mrs. Ross. According to Ruth, Mrs. Ross, a heavy lady, wanted to come and take a bath, and she wanted Ida to bathe her. Ida wasn’t up for that.

Ruth concluded her story by simply stating: “That did not go over too well.” [11]

[9] Durango Herald-News, June 1, 1958, story headlined “From A to Zink … or One Man’s Family,” about John James Zink and his descendants.