Potatoes, and the art of gardening

Crops varied on the ranch over the years, but mainly it was potatoes, alfalfa, barley, pasture grass and corn. The latter four were raised primarily to feed the livestock rather than sell directly. A snapshot from 1958 shows there were 120 Angus cattle and 250 Hampshire sheep on the ranch. 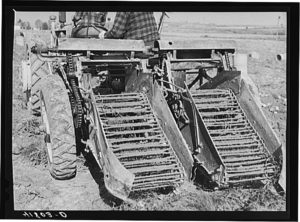 A double-row potato digger seen on a farm in Maine, October 1940. Photo from Library of Congress, originally taken by Farm Security Administration/Office of War.

Potatoes were the major cash crop, producing “some 7,000 sacks of premium Red McClures and Russets” annually at the old Kerr ranch in Hermosa.[1]
The Zinks purchased the Kerr ranch around 1955, and a lot of work went into getting it into production and keeping it in production. Trees were removed, fences taken out and new ones built. The drainage system was re-engineered. Most of the 90 acres were gopher-infested and considerable effort was made to flood them out.[2]

“I remember killing over a hundred gophers one weekend,” Nelson Zink wrote in 2017. “Only when new irrigation ditches were built was a potato cellar constructed and the place settled down to potato and alfalfa growing.”

One risks oversimplifying the planning that actually went into each good harvest. It was massive, and actually took years.
Potatoes require nitrogen in the soil, and, to a certain point, the more nitrogen in the soil, the bigger and healthier the potatoes that will arise. Nitrogen is used by plant leaves, and healthier leaves increase photosynthesis and increase tuber (potato) size.

Not to get too technical here, but the point is that good crops couldn’t be produced haphazardly. Rotating the fields, to assure a high level of nitrogen, was necessary. The rotation cycle began by simultaneously planting barley and alfalfa. The latter was key. Alfalfa is a legume (as are peanuts and beans, for common examples), and legumes are “nitrogen-fixing” – that is, they pull nitrogen out of the air and deposit it in the soil. 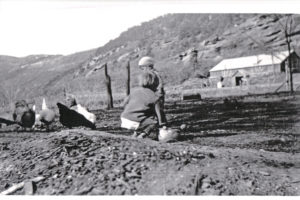 The potato cellar can be seen on the west side of the highway (what is now County Road 203).

Barley grows quickly and can be cut for hay and fed to cattle. Meanwhile, the alfalfa is slower growing and will be ready the next year. So basically, the rotation harvest worked out to one year of barley, three years of alfalfa during which nitrogen was returned to the soil, and two years of potatoes.

Planting would begin in May, once the soil temperature reached 40 or 45 F and the soil could be worked. October was harvest season – a time for the whole family to pitch in, along with a dozen or more seasonal employees.

A quick look at the harvest process:

A 60-horsepower tractor dragged around the fields a contraption called a two-row potato digger, which had side-by-side, 2-foot-wide rotating chains that would dig up the soil in two rows at a time, sift the dirt and leave the potatoes on the earth’s surface. Workers would follow, lugging sacks connected by a hook to the front of their belt. The workers stooped to pick up the potatoes and tossed them into the sack until it got too heavy to drag. They’d unhook the bag, leave it, and hook another bag to continue.

Meanwhile, someone following would sew up the sacks. (Ed Zink says this was his task when little.) A truck or wagon would then come along, pick up the sacks and haul them to the potato cellar for storage and sorting.[3]

Sometime after 1960 the process changed, negating much of the backbreaking human labor. Potatoes could be gathered mechanically (no stooping over while lugging a sack) and delivered to a table, where a person standing upright could sort out the weeds and dirt clods, leaving the potatoes.

“Five people could do a hundred times more potatoes in a day,” Ed Zink says. “It totally transformed the business.”[4]

‘An art form of tradition, respect’

Today’s farms and ranches are highly mechanized and use fertilizers and pesticides in sometimes staggering amounts. The Zinks’ produce and beef was organic. Using the methods of a half-century ago, frankly, took a greater knowhow of your soil and conditions. If you screwed up back then, you couldn’t just sprinkle in a little more fertilizer and call it good. 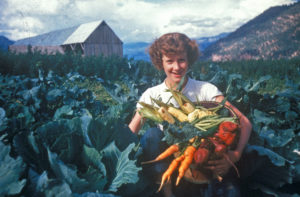 Anne Zink displays a cornucopia of produce, part of a 4-H project.

John and Ruby Zink’s expertise came from hundreds of years of knowledge passed down through generations, and from personal experience. If you ever took the time to talk to either about farming and gardening, you would understand the vast skills and understanding they developed. Many people did take the time, one being Ian “Sandy” Thompson, a noted writer in the Four Corners and nephew of John and Ruby. Thompson, who died of cancer in 1998 at age 57, was the son of Ruby’s sister, Amy.

“John and Ruby Zink have spent more than half a century coaxing sustenance from the red soil of the Waterfall Ranch and, as a youth, John spent a great deal of time working in the Zink greenhouse at Hermosa,” Thompson wrote for his Durango Herald freelance column, “Four Corners Almanac.”[5]

When “Uncle John” talked about gardening, it was about more than a small plot in the back yard.

“Gardening to my uncle is a visionary concept embracing a whole host of natural and social issues, a framework within which the people, plants, soil and weather of the Four Corners Country can come together to make this a better place to live.”

Four Corners growers deal with a paucity of water and a diversity of microclimates, among other handicaps, Thompson wrote. He rued that successful gardening couldn’t be learned from textbooks, only from experience, and might become a lost art here.

“The best and most practiced gardeners here are old-timers who grew up in a time when the garden was an important, immediate source of sustenance,” he wrote in the column, circa 1990. “A failed garden had a direct result: there was less food on the table.”

John Zink, he noted, was currently at work on a project to bring old-time gardeners together with younger people and newcomers, so they could pass along their experience.

“To learn gardening,” Thompson’s story concluded, “one must step out of the immediate present into a tradition – a tradition that respects the peoples, places, and seasons that shape the Four Corners Country.”

Sobriety and the missing finger

Grandmother Myra lived at the stone house with the Zinks in the 1940s and again in the early 1950s, apparently not long before she died. Anne recalls that Myra, as well as being one of those old-time gardeners Ian Thompson alluded to, was very nature-minded. She would put bread crumbs out for birds in the winter, and taught Anne and Ida the various species, including chickadee songbirds and juncos. Myra and John Nelson had been members of the American Humane Society, whose founding purpose was the treatment of working animals and livestock. Myra and John frowned on the abuse that certain neighbors inflicted on their herds.[6]

Myra, only about 5 feet tall, used a walking stick that rose to her shoulder. On it she scratched the heights of her grandkids each birthday. Eventually she became wheelchair-bound and moved to what was called the “Old Ladies Home, somewhere just north of downtown Durango. Anne recalls visiting her after church. Ed remembers she served the blind by translating messages into Braille, using a wooden machine to key in the raised letters.[7]

Ruby (Mom) always felt it was important to serve others, Jerry Zink notes. It’s a trait, obviously, that was passed down through the generations.[8]

Myra, always the proper one, was a member of the Women’s Christian Temperance Union. The WCTU was one of the leading proponents of prohibition, which lasted from 1918-1933. Granddaughter Anne remembers Myra and other older ladies speaking about temperance at church, and having the kids sign a pledge that they’d never drink.[9] (Please forgive Anne for reneging on that pledge.)

Myra, by then in her late 70s, declined in the 1950s. She died September 23, 1953, and was buried south of Durango next to her husband, John Malcolm, at Elco Cemetery off County Road 213, near Bondad.

Grandfather John J. Zink, meanwhile, lived for a while at 1151 East Second Avenue, just south of the old high school. He later moved to San Diego and spent most of the time there, although he’d come back to visit. Ed and Jerry have almost no memories of him. Jerry doesn’t remember seeing his grandfather alive, but vividly recalls John J.’s open-casket funeral in Durango in early June 1959. Jerry, age 9, peered unsuspectingly down onto the body. “I remember very distinctly looking in there, and the finger was gone!” The result of his mishap during 1921 construction of the stone house.

John James Zink was buried at Greenmount Cemetery above downtown Durango, right next to Ida and his mother. John had outlived his first bride by more than 33 years, but as he reached his end, there’s little doubt that she was the one he most hoped to see.

After John J.’s death, in the summer of 1959, the family took a road trip to California to tend to his estate. By then, the two daughters were off on their own and didn’t go. 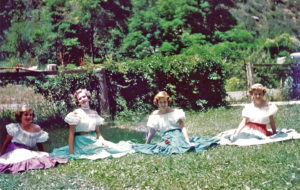 Anne had started college in the fall of 1956 at Colorado State, but transferred to Brigham Young University, where fellow Durangoan Norman Putnam was playing football. Anne was busy, too, at BYU, being secretary of the Home Ec Club, among other things. The two married on September 14, 1958, in Durango.

Ida had graduated from Durango High School in 1959, a member of the National Honor Society, and headed to Arizona State. (There she met Don Kolb. The two were married June 27, 1963.)

So back to the road trip. Anne and Norm stayed in Durango and tended to the ranch. With college looming, Ida was busy working and didn’t go. So John W., Ruby and the three boys packed into a non-air-conditioned Plymouth station wagon and headed west. The interstate system wasn’t completed yet, and neither was Glen Canyon Dam, so in Utah they crossed the Colorado River via a steel-cable-guided, powered wooden raft at Hite Ferry. They spent several hundred miles on dirt roads. After cruising through Sequoia and Yosemite national parks, they headed south to San Diego to deal with John J.’s property and to meet his housekeeper.

Back at Waterfall Ranch, the evolution continued. The girls had left the nest, mechanization was creating a new work flow, and at Christmas 1960, as the family left for a day trip to Cortez, someone left something smoldering downstairs.