The Animas Valley filled in fairly quickly, and by 1880 a couple dozen families called it home. It was an impressive mix of folks. They’d come from Ireland, Germany and England, but a greater number were U.S.-born, from New York, Kentucky, Missouri, Iowa, Indiana, and a few from New Mexico.[1] 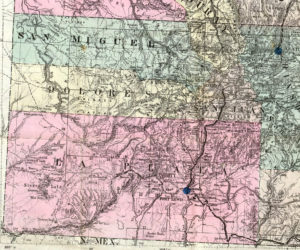 Map of Colorado, published 1884 by Chain & Hardy. La Plata County was created in 1874, San Juan County in 1876, the same year Colorado was made a state. In 1889, La Plata’s western half would become Montezuma County.

Some were farmers and ranchers. Others worked as miners or loggers. Many began coming to the area to take advantage of the opportunities created with the promise of two train lines. The Denver & Rio Grande, from the east, would for the first time bring a line to the new town of Durango, just south of the already established Animas City (incorporated in 1878). The first train from Denver arrived in Durango in July 1881.[2]

Also, beginning in 1879, the same line was being surveyed from Silverton to Durango. Having a railroad, obviously, would speed the delivery of produce from the lower, farmable elevations up to the highlands where the miners toiled. This line would cut right through some of the already established Valley ranches, and pass within a couple hundred yards of the Lambert cabin. The first train reached Silverton in July 1882.

For various reasons, newcomers and even tourists were coming to the Animas Valley. Trimble Hot Springs resort, with its new hotel, opened December 28, 1882, “with a grand ball.” Visitors from as far as the East Coast came for the springs’ purported healing properties. For a dollar you could take an excursion train from Durango to the small depot at Trimble, which was about two miles north of Waterfall Ranch.[3]

The Lamberts remained at the Waterfall Ranch for five more years after Hugh’s return. In September 1882 Candacy Lambert officially established a patent for the Waterfall Ranch land, in accordance with a congressional act of 1820 that opened land to settlers.[4]

J.P. Lamb continued to make enemies – or perhaps it was the same enemies out to monkeywrench his farm. Someone chopped his shade and fruit trees, shot a mule and broke his ditch opposite the Lambert house, said an April 20, 1882, classified ad in the Durango Record. Lamb was offering a reward for conviction of the guilty parties. 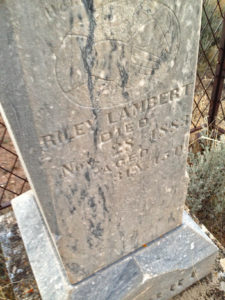 But the zing of bullets from that 1876 shootout reverberated for decades.

Riley Lambert was proprietor of a Silverton dance hall on November 25, 1883, when Town Marshal Tom Cain arrested Lambert’s bartender for making threats. When Lambert came to the police station to have the bartender released, Cain refused. Lambert drew his revolver and the two struggled. Both were shot. A bullet passed through Cain’s cheek and another grazed his chest. Cain’s .45-calibre bullet made “an ugly wound” in Lambert’s gut.[6] Although the bullet was surgically removed, Riley Lambert died several days later. His grave is at the old Animas City Cemetery, just above Florida Road not far from downtown Durango.

Another of the Lambert sons, who was not involved at the Waterfall Ranch incident, also met his end, as they say in the Old West, at the wrong end of the gun. An 1889 account in the Ouray newspaper: “Henry Lambert, one of the notorious Lambert gang of La Plata county, was shot and instantly killed by Officer (Bud) Sargent of Durango Monday night. Lambert is the son of Hugh Lambert who shot (A.H. Endsley) in Montrose county last week. The bad men must go.”[7]

Hugh Lambert stood trial for the Endsley shooting but was not convicted as his friends provided an alibi.[8] Hugh Lambert was a stubborn, stubborn man who refused to go away. He wrote in 1891:

“I have always attended to my own business, have never arrested or hope to arrest any man in the state, and will fight in self-defense or for my stock just as quick. … I offer a reward of one hundred dollars to any man who can make it appear that I have ever belonged to a band of thieves, or that I have ever stolen anything in my life or falsified my word in any case.”[9]

Later in 1891, in June, Endsley tracked down Lambert, shot him twice and left him for dead. But Lambert resurfaced in November: “(Hugh Lambert) recovered, however, and swearing vengeance, dropped out of public notice until we find him again in the Animas valley defying the officers of the law and swearing that none could take him alive. Early one morning the officers forced their way into the cabin of the old man and before he was aware of it, captured him. He will be tried on several counts.”[10] 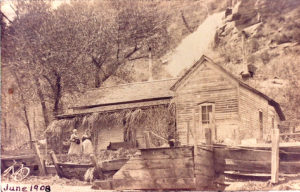 The ranch buyers were Thomas H. Wigglesworth, a longtime railroad man who’d served as superintendent of construction for the Durango-Silverton line, and his family. His wife, Ann, was a prominent supporter of the Southern Methodist Church that opened in Durango apparently in the early 1880s.[11] The ice cream socials that Ann was known to host might have gotten a little crazy, but there are no reports of guns involved. To wit:

“Bert and Mrs. Gartin drove their tandem bike to the Waterfall ranch social last night,” reported the Durango Democrat in June 1900, “and reported the wheeling as superb.” A bicycle path connected Durango to Trimble.[12] Further mayhem: “The occasion was rendered additionally enjoyable by arrival of the Trimble Springs string band.”[13]

Ann also hosted get-togethers of the anti-alcohol Women’s Christian Temperance Union. “A delightful time is assured and all are invited, especially the Durango people,” a 1905 newspaper said.[14]

Thomas entered the railroad profession in 1854, serving about every position you can think of: axeman, rodman, assistant, resident and division engineer, for starters. Eventually he was hired to help build railroads, and he moved around quite a bit. In 1879 the Denver & Rio Grande Railroad assigned him to be “locating engineer in charge of construction” (the surveyor) for the new Silverton-Durango branch. Beginning that summer it was his task, with his crew, to figure out the most expedient Silverton-to-Durango route.[15] 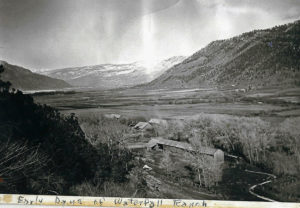 View of Waterfall Ranch and the Animas Valley, 1911.

His preliminary survey reached the Animas Valley on October 8, 1879, just before a big snowstorm. He began again the next spring, finally finishing the survey the following year, in July 1881.[16]

Construction had begun already, in 1880, and the railroad opened in 1882, creating a crucial link, a quick and efficient way to move people and ore from the high country’s mining districts.

During the building of the railroad, Wigglesworth couldn’t have helped but notice the waterfall. He must have liked what he saw, learned that the present owners were ready to move on, and worked out a deal.

The Wigglesworths bought Waterfall Ranch from the Lamberts in 1883, if Hugh Lambert’s account is accurate. Thomas, his “charming southern wife”, and their five children, became the Waterfall’s next guardians. Ann’s connection to the Southern Methodist Church had started in her native Tennessee. For those coming from the East, the West was still an uncivilized, unfamiliar place, and “the Wigglesworth home was always open and a welcome haven to young ministers coming to this western frontier,” wrote fellow churchgoers.[17] 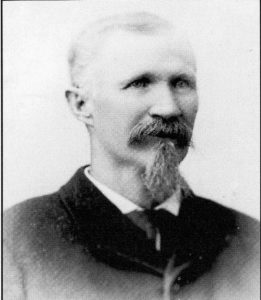 The 1900 Census shows the Wigglesworths were living in the Trimble/Hermosa area (which included Waterfall Ranch), and Thomas’ profession was farmer.

Thomas Wigglesworth, age 73, suffered a stroke and died at his home in 1909. Ann was getting older, the kids had grown up, and she made the difficult decision a few years later to put the ranch on the market.

Who out there might want to purchase some lovely acreage in the Animas Valley, complete with a scenic cascade of water?

[2] Cinders & Smoke, a mile by mile guide for the Durango to Silverton narrow gauge trip, Doris B. Osterwald, sixth edition.