We can’t tell a heartwarming tale about Iowa native Sarah Jane Grant Britton Zink, but her life was certainly eventful. And she was a survivor.

It is said that she was a cousin of Ulysses S. Grant, Union general in the Civil War and president from 1869-77. The Civil War claimed Sarah’s first spouse – Joseph Britton was shot as a Union deserter,[1] according to Ruth Ellen Zink Duncan’s written family history – but Sarah rebounded. Her second husband left her in her 60s, apparently for warmer climes, and she spent her final years living with a daughter from her first marriage and then a son from her second marriage. 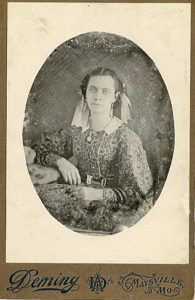 She lived in Iowa, Nebraska and Colorado. Although she didn’t stick around long enough to live at Waterfall Ranch, she did make it to Animas City.

Born Sarah Jane Grant in 1839 in southeast Iowa, she married Joseph Britton on New Year’s Day, 1862, in Madison County, Iowa. (Yes, there are covered bridges there.) The young couple had a daughter, and then, when Sarah Jane was pregnant with a second daughter, outside forces intervened to derail her life.

Joseph was called to serve for the Union side in the Civil War, enlisting in Iowa’s Fifteenth Infantry. [2] He did not return. There is a record of a Joseph Britton being killed in action on October 13, 1864, near Richmond, Virginia, but it’s unclear whether that was him.

In any case, Sarah Jane, now a widow, had her second daughter when Joseph was gone or dead. One of the daughters died. The one who survived, Nannie, was born in September 1863.

These weren’t good times. They had little to eat, and a neighbor took pity, telling Sarah she could help herself to the corn in his field. She shelled the corn, pounded it, and added water to make gruel.[3]

Sometime during the next few years, Sarah linked up with James Wilson Zink, who was nearly seven years her junior. They married in 1871 in Iowa, moved to Nebraska in 1879 and continued their farming life, and together they had four children: Martha (Hayes), Marion (that’s a male), John J. and Clarence. They lived in Fullerton, Cedar Rapids, and Loup City, all smack dab in the heart of Nebraska.[4] 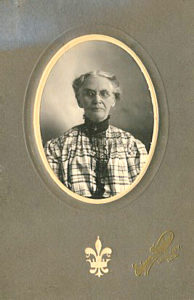 Sometime, after 1900 and before 1910, Sarah and James separated. James wound up in San Diego. If you’re looking for a reason for the separation, it’s possible James wasn’t so easy to get along with. Their daughter Martha married Allie Hayes, who had some issues with his father-in-law.

“Uncle Allie told me Grandma Sarah Zink was an angel on this earth,” wrote Ruth Zink Duncan, “and he believed Grandpa James Zink was the meanest man he had ever known.”[5]

Sarah moved in with daughter and son-in-law, Nannie and Coke Ballard, in Lincoln, Nebraska. That’s where she was in mid-1910,[6] which was an eventful year for the Zinks.

Also in 1910, her son, John James Zink, moved his family, wife Ida and their three children, from Nebraska to Animas City. Later that same year, John made his way out to Nebraska and brought his mother back to Southwest Colorado with him.

“Mrs. Sarah J. Zink, mother of Mayor John J. Zink of Animas City, passed away peacefully yesterday morning, at the home of her son, after a long illness. Mrs. Zink was 73 (actually 72) years of age, death being the result of a general breaking up of the system caused by her advanced years. Since Dec. 20 she had been confined to her bed.”