Merry Christmas; wait, is something burning?

When the Zinks returned from an all-day trip to visit family in Cortez the day after Christmas, 1960, they had a surprise awaiting. Something akin to coal in their stockings. 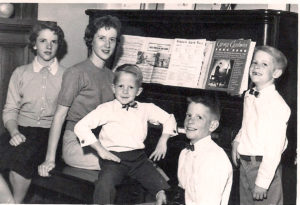 A Zink family Christmas, not too long before the Zink Christmas fire.

As John Zink drove the highway home that night, nearing Waterfall Ranch just a little past 11 p.m., there was a surprising amount of activity. The family encountered a multitude of trucks and cars and people at roadside. John figured there’d been an auto wreck in front of the forty-year-old stone structure.

Instead, their house was on fire!

John, anxious and alarmed, ran up the back stairs and stepped inside. Only to discover the stairs were gone. He landed in the fire, but two men standing right there each grabbed an arm and quickly pulled John out.[1]

La Plata Volunteer firemen battled the blaze, which had been reported by neighbors, for more than two hours until past midnight.[2]

“I remember the night the Waterfall Ranch caught on fire,” then-neighbor Kay Rogers wrote. “My dad hooked up hoses to our pump and we dragged them through the apple orchard over to the Zinks’ house.”[3]

The afternoon Durango Herald reported December 27 that, indeed, there was no auto accident that night: “The wreck is Zink’s home, now a shell still red and unscorched on the outside, but housing charcoal furnishings, some of them still smouldering listlessly in the morning sun.”

The fire started in the basement furnace. The furnace’s coal remnants, or “clinkers,” needed to be periodically removed to keep from clogging up the heater. Before leaving for Cortez, John had taken the clinkers out and put them too close to a wall. Another theory was he hung a wet coat on a nail too close to the stove. In his hurry, he forgot it. In any case, John took the blame for the blaze, and the three boys were off the hook.

The Herald reporter, Hal Piper, described a dismal scene that Tuesday morning after the blaze: a scorched wicker basket containing scorched clothes, a blackened ironing board. “In the living room, a Christmas tree, still bearing traces of green, is canted at a mocking angle toward a hole where the floor fell through. Nearby on a table is a bowl of walnuts and a fruitcake, a little overbaked now.”

This exchange was reported[5]:

“John,” Mrs. Zink called from upstairs. “Shall we rip out the window casings so that we can get the mattresses out to dry?”

“Better not,” Zink answered. “They would only freeze out here.” 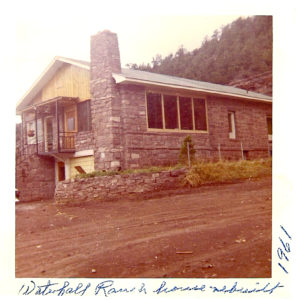 The back of the house suffered the worst damage, and the fire also swept through the front of the downstairs area. The upstairs wasn’t in bad shape, damaged only by smoke and water. One casualty: A hi-fi stereo that was a Christmas gift the day before the fire.[6] Where would Ed play his Kingston Trio records?

It was a shock, but the silver lining was that only things, not people, were damaged. And none of the surrounding buildings were touched. For the immediate future, the kids found places to go. Ida, who was in the middle of her college break from Arizona State, went to stay with sister Anne and her husband, Norm. Ed and Jerry went to neighbors’ homes. Nelson slept in the potato cellar. The kids joke that John and Ruby didn’t stay anywhere, but went directly to work on repairing the house.[7]

While it was restored, the Zinks brought in a trailer house and lived in it for several months nearby.

Some of the burned house was salvageable, including the original stonework. The house became more ranch-style. The upper story was not replaced, and the house was “stretched out” toward the east, with more stonework added.

It was finished by summer’s end; John, Ruby, and the three boys moved back in.

In late August 1961 Ruby entertained the WSCS (women’s society) of the Methodist Church in the recently rebuilt Waterfall home, the Durango Herald reported.[8] It was “said by WSCS members to be a real dream house.”

Change was a constant at the Waterfall Ranch, and more were coming.