Waterfall Ranch is nestled in the flat-bottomed, steep-sided Animas River Valley. The people who lived there, their activities, and the things they built during the last hundred years were influenced by the geology of this valley. I will describe some of the geologic features that seem to have had a direct effect. Most of the geologic story will be left out, so you can get on with the story of the Ranch.

The igneous and metamorphic rocks that underlie the Valley are about 2.5 billion years old. At the head of the Animas River are the high San Juan Mountains, where the hard basement rocks were thrust up and exposed as sharp, jagged peaks 14,000 feet in elevation. The high elevation affects the climate, resulting in heavy snowfall that persists and feeds the river throughout the year. The permanence of river flows in the valley made it the pre-eminent agricultural area as European settlers arrived in the region and diverted the river into irrigation.

Also in the high country, is the mineralization from metamorphic, volcanic, and tectonic processes around Silverton. The precious metal deposits attracted European settlement and supported industrialization (railroad, smelters, coal mining) of the region. The railroad through the valley accelerated agriculture, logging, commerce, roads, and electricity. A side effect of metal mining is a river polluted with tailings and acid mine drainage. Domestic and agricultural water quality is adversely affected.

At Bakers Bridge, about 12 miles north of Durango, the old basement rock layers drop below river level, not to be seen again to the south. A succession of younger sedimentary rock layers totalling 16,000 feet in thickness is traversed by the Animas River on its way to joining the San Juan River. The gray limestones of the Hermosa layer (300 million years old), are followed by the red shales, siltstones, and sandstones of the Cutler and Dolores formations. The stone for the house and potato cellar at the Waterfall Ranch is from the Cutler. Next come the thick white Entrada and Junction Creek sandstones, forming prominent cliffs. The slope-forming Morrison formation appears on both sides of the valley near Durango. Frequent mudslides and thick brushy vegetation hide this rock layer from view. It contains dinosaur remains from 150 million years ago, and uranium deposits at widely separated locations in the region. The south-sloping cap rock of Missionary Ridge and Animas Mountain is the Dakota sandstone. It is resistant to erosion by water or ice. Where this strong layer dives into the river, the broad flat Animas Valley changes to a steeper gradient through Durango. The city occupies gravel terraces which cover the easily eroded Mancos shale. The coal-bearing Mesa Verde group of Smelter Mountain, just southwest of downtown, provides the reason the railroad located Durango where it did. Bodo Industrial Park sits where the soft Lewis shale made room for it.

At the southern edge of Bodo, the gently dipping layers get much steeper, forming the hogback that defines the border between the San Juan Mountains and the San Juan Basin. The Pictured Cliffs sandstone supports thick steep beds of Fruitland coal at Carbon Junction, another important point on the railroad. On top of that is the McDermott formation (66 million years old), the striking Purple Cliffs where dinosaurs made their last stand. The iridium-rich layer associated with a meteorite impact and mass extinction is at the top of the Purple Cliffs, or at least it should be!

But enough stratigraphic excitement for now. It is time to get back to the Ranch. 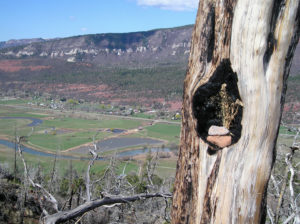 A look southwest toward the Animas Valley from the Haflin Creek Trail. A careful inspection reveals the Waterfall Ranch waterfall, just to the left of the tree. The red stone is the Cutler formation, and above that, the white rock includes the Entrada and Junction Creek sandstones.

Many times in geologic history, the snow accumulated in glaciers that flowed down the valley past the Ranch. From Bakers Bridge to Durango, the inner valley was predominantly shaped by the Animas Glacier. About fifteen times over the last 2 million years, ice filled the valley wall-to-wall up to 1,500 feet deep, sliding slowly southward. Gravel, cobbles, and boulders of hard rock from the high country pushed along by the ice acted like a rasp. The valley walls were straightened and smoothed. The visual effect of the glacier-burnished valley wall is attractive in the same way that a planed and polished piece of wood shows off its grain in colorful detail. Each colorful rock layer is freshly cut and naked of soil or vegetation. The valley floor was widened and flattened as if a giant bulldozer were at work. The broad, flat result was attractive to farmers, railroad builders, and land developers.

The valley walls show two distinct types of erosion. The upper ridges are cut by V-shaped canyons formed by the tributaries of the Animas River. Below the top of the former glaciers, the canyons are cut off, leaving hanging valleys with waterfalls.

Falls Creek, which gave the Waterfall Ranch its name, was the most constant of these streams. Irrigation started there before law and order. The glacial oversteepening of the valley wall made possible the generation of electricity at the Ranch with a short penstock pipe and high head pressure.

Some enormous slabs of rock now lie on the valley floor near the canyon walls. The steep walls and the action of glacial ice helped position these isolated boulders for later gunfights, masonry projects, and yard ornaments.

Repeatedly, at what was to become the northern edge of Durango, the supply of ice gave out as the glacier stalled against the Dakota sandstone. The rock carried by the ice was dumped in a ridge (moraine) across the valley. The river emerged from the glacier, only to be dammed by the moraine, forming a lake. As each glacial period ended, the ice melted faster that it was replenished, causing the front of the glacier to advance-and-retreat back up the valley. Occasionally the river would cut through the moraine and the lake would drain rapidly in an enormous flood. The rushing water pushed 5-foot-diameter boulders down the channel for many miles. The granite boulders at Sunnyside were carried by ice from Silverton to Durango, then rolled by river water to their present location.

During the periods between glacial advances the valley floor was filled with sediment. As the swift-flowing river left the gorge at Bakers Bridge, it spread out in a braided pattern and dropped its load of gravel. At Trimble, small pebbles and coarse sand were deposited. Then the pattern of the river changed to meandering. Lazy loops move wall-to-wall and migrate slowly down the valley. Loops get cut off as isolated oxbows and horseshoes.

Since my earliest explorations of the Ranch, I have wondered why the river insisted on making those bends and loops, why it went out of its way, rather than flowing directly from Trimble to Durango. Why it never seemed satisfied with its course, constantly changing over the years. Farmers tried to stop this process, but found that even armoring the cut bank with junk automobiles was not a reliable way.

I have recently learned that meanders have a complicated mathematical basis (Albert Einstein worked on the problem). Fortunately, there is a simple analogy that helps in understanding the process: Imagine you have a cup of water with a few tea leaves in it. You see the tea sink to the bottom, because it is heavier than water. Then you stir in a swirling motion with a spoon and let the solution continue to rotate on its own. You might expect the tea leaves to move away from the center of the cup because of centrifugal force. Paradoxically, the leaves pile up on the bottom in the center of the cup! The reason is that the rotating water at the top surface is not slowed by friction like the layer at the bottom of the cup. The centrifugal force on the top layer is greater. Water moves outward on the surface, then down along the cup wall, then inward along the bottom dragging the tea with it, and then rising to the surface again, leaving the heavy tea behind. In a river, a slight bend starts the spiral flow: The high-velocity downward flow at the outside of the bend cuts the bank back, exaggerating the bend. Sand is carried across the riverbed to the inside of the bend. There the slowly rising water dumps the sand, leaving a sand bar. At periodic intervals, the direction of the bend is reversed, enabling the river to eventually get to Durango.

The river-deposited soil at the Ranch is fine sand and silt. The water level in the glacial lake was controlled by the elevation of the end moraine. There, the river spilled out of the lake and continued south down the valley at a steeper gradient.

There is little soil in the high mountains to absorb runoff, so the river is prone to flooding during spring snow melt and prolonged rainstorms. Nearly every year, the river rises to the top of the banks at the Ranch during warm weeks of May or June. Every decade or two, autumn rains bring significantly larger floods. Each flood brings high water and a heavy load of sand. As the river overtops the channel, the water spreads out and slows, dropping the sand. A natural levee forms alongside the channel. Tributaries to the river sometimes run parallel to the river for some distance downstream before finding a break in the levee where they can enter the river. In some years with especially high water, livestock has been marooned on the levee and had to be rescued. In recent decades, the gravel mining north of Trimble has created deep holes in the river, and much of the sand is captured there. The river channel at the Ranch has gotten deeper, so the flood waters do not cover the pastures and railroad so much any more.

The combination of oxbow sloughs, and the high, dry ridge along the river posed a challenge to John W. Zink. He wanted to maximize the amount of irrigated, cropped and grazed land on the Ranch. To minimize the waterlogged wetlands, channels were cut to the river to drain the wetlands and carry the flow of Falls Creek and irrigation wastewater to the river. He also wanted to get irrigation water to the isolated dry uplands along the bank of the river. Ponds and ditches were built up on dikes to get water to the high points. At one place, an elevated irrigation ditch crossed on a bridge over a drainage channel.

As you’ll read in Section VIII of this history of Waterfall Ranch, Ed Zink has a vision for the same land that is less agricultural. Some of the features that were removed by his father have returned.

Radiating from the waterfall is a delta of red soil with a range of particle sizes from clay to cobbles. It has more nutrients than the river sand, more clay, and more rocks. The elevation of the delta and the steep valley wall have an effect on cold air masses, protecting frost-sensitive crops. The Ranch provided natural, scenic, and agricultural opportunities and challenges peculiar to its geologic setting.

Editor’s note: Jerry Zink has a master’s degree in mining engineering from Colorado School of Mines. He co-founded StoneAge Engineering in 1980 in Durango. He is also grandson of John James Zink, who purchased the Waterfall Ranch a hundred years ago in 1917.

Some of the information in this story was derived from two sources:

Conversations with geologist Mary Gillam about glaciers and gravel deposits.