It sounds so romantic, to have ancestors who signed the Mayflower Compact, that famed document written aboard the ship that lay in harbor off the Cape Cod shoreline on November 11, 1620.

Well, it is romantic, but before getting too carried away, consider a couple of facts:

Fortunately for the Zink-Nelson clan, John Cooke and Richard Warren were among the survivors. Richard sent for the rest of his family, his wife and five daughters, and they arrived on the ship Anne in 1623. His daughter Sarah, who would continue the lineage we’re concerned about, was among them.

John Cooke was a young lad of 10 that first winter. He came to the New World with his father, Francis Cooke, while the rest of the Cooke family followed on the Anne. In 1634 John would marry Sarah Warren, and without boring you with all the “who begat whoms,” let’s just say that there were eight more generations between John-Sarah and Ruby Nelson.

Forty-one men signed the democratically based compact, concocted while they were trying to determine the best place to anchor. Among the signees were Francis Cooke and Richard Warren, thus giving the Zink-Nelson clan two Mayflower Compact signatories in their lineage.

More than one-third of the Mayflower passengers were Puritans, members of a faction known as the English Separatist Church. They didn’t get along so well with King James and his Church of England, so they packed up and went across the channel to Holland in 1607. 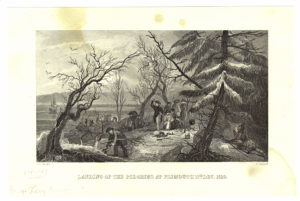 The Puritans lived in Amsterdam, then in Leiden, where John Cooke born in 1610. Holland wasn’t so great either (most everyone there speaks Dutch, for instance, and the economy wasn’t so hot), so they boldly decided to make a run for the New World. They got the sponsorship of the Company of Merchant Adventurers of London, and September 1620 boarded the Mayflower, a three-masted merchant ship.

As conditions worsened off the shore and their situation became dire, the Puritans agreed to create a pact with others on the ship. Others were referred to by the Puritans as “Strangers.” Ultimately both groups would simply be called Pilgrims.

Wrote the Society of Mayflower Descendants:

“In 1620 the Pilgrims, persecuted for conscience’s sake, ‘braved the tempests of the vast and furious ocean and the terrors lurking in the American wilderness’ to plant their State of Freedom.”[1]

They were in over their heads, but they probably knew that.

In late December they decided to make their home at Plymouth, on the west side of Cape Cod Bay. Although many lived out the winter aboard the Mayflower, the building of the new village began.

Francis Cooke was a carpenter and boat-builder.[2] In February 1621 he was working with Capt. Myles Standish, hewing logs close to Plymouth to construct a fort. They left for dinner (the noon meal), and when they returned their tools were gone. Indians, who would both greatly help and greatly hinder the colonists over the years, had taken them.[3]

Francis was among the few well enough to assume hard labor. In the renowned work “Of Plymouth Plantation” by William Bradford, one of the original colonists, the winter’s toll was described: 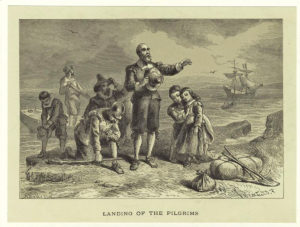 “Soon a most lamentable blow fell upon them. In two or three months’ time half of their company died, partly owing to the severity of the winter, especially during January and February, and the want of houses and other comforts; partly to scurvy and other diseases, which their long voyage and their incommodious quarters had brought upon them. Of all the hundred odd persons, scarcely fifty remained, and sometimes two or three persons died in a day. In the time of worst distress, there were but six or seven sound persons, who, to their great commendation be it spoken, spared no pains night or day, but with great toil and at the risk of their own health, fetched wood, made fires, prepared food for the sick, made their beds, washed their infected clothes, dressed and undressed them; in a word did all the homely and necessary services for them which dainty and queasy stomachs cannot endure to hear mentioned.”[4]

John Cooke became an upstanding member of the community, serving as deacon and as Plymouth General Court deputy (the general court was a legislative body). He helped his father build a forty-ton vessel. In 1637 he volunteered in battle against the Pequot Indians, and served as captain.[5]

Yes, John Cooke, whose lineage passes through the Mosher family, which you’ll encounter later, was one of the survivors.

And that is romantic.

[1] The Society of Mayflower Descendants, or simply The Mayflower Society, wrote this for an anniversary of the landing, apparently in 1897.

[5] The Genealogy of Francis Cooke.