The Nelsons: Swedish pipeline to Colorado

Ethel Ruby Nelson was born on a summer day in 1916, south of Durango, along the Animas River in an area known as Sunnyside.

Ruby was a God-fearing, peace-loving, strict but fair woman, and nobody who met her had anything but respect. She raised five children in the Animas Valley, and lived long enough to enjoy a slew of grandkids and a couple of great-grandkids. 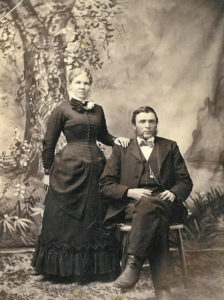 She wore her personality perfectly naturally, but nobody’s born in a vacuum. So before we talk more about Ruby, here’s a look at a few of her ancestors. You’ll see a few trends, a few family traits from the past that influenced her life.

Susanna Nilsdotter and Johannes Nelson grew up in the same part of southern Sweden, a county called Kronoberg. It’s said they met at a Midsummer’s Eve Festival,[1] a huge celebration in Sweden that occurs around the summer solstice and goes on until everyone’s exhausted. That may be true, in some fashion. But the real link is apparently the Fagerhult Västregård farm, where Johannes lived from the time of his birth.[2] Susanna’s father, a miller, came to work and live there with his family in 1858; at the time, a miller would reside on the farm where he was working.

Johannes left in 1866 to spend a couple of years in Denmark, and returned to Sweden in November 1868. The tall, blonde Susanna, then 21 and twelve years younger than the mutton-chop-sideburned Johannes, became pregnant in March or April 1869.

John Malcolm Nelson (Ruby’s father), was born December 23, 1869. No father was recorded on his birth record, and when he was about 6 weeks old Susanna went to a ceremony at the local church to be absolved of the sin of having a child out of wedlock.[3]

Susanna did not bring her young son. Likely the more able-bodied family members went to America first, to get established and begin the hard work of building a new life. Best to leave young John M.[5] and his grandmother, Maya (Maria) Johannson, in the relative safety of the homeland for the time being. 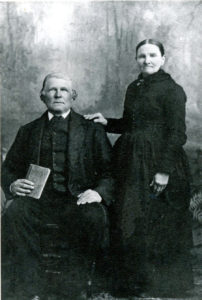 So John Malcolm Nelson was 3 when he arrived in America with his grandmother and aunt Anna Maria and uncle John Henry in August 1873. Another of Susanna’s brothers, Anders, left for America a few years later.

For all the family members leaving their ancestral homes and making this life-altering move, the destination was Colorado.

Susanna, her siblings and parents are from a small town in Kronoberg County called Ryssby. Starting in the late 1860s, with more coming in the 1870s and 1880s, a large Swedish contingent began gathering in the Longmont area and establishing a commune of sorts. Eight such families arrived in 1869.[6] Some prime land had already been taken by then, but they gathered enough water rights to begin farming. For sure, the Territory of Colorado’s Front Range offered better farming than the rocky, thin-soiled area of Sweden where they’d been trying to sustain agriculture.

Colorado Territory in the early 1870s was anxious to increase its population in order to qualify for statehood – and broaden its tax base – and enticed the Swedes to immigrate. Also, Sweden was industrializing, which meant skilled craftsman were having difficulty finding work. From 1870-1900, the number of Swedes in Colorado grew from about 220 to nearly 11,000.[7] Many were farmers, but many more worked in the mines, digging out gold, silver and other valuable metals.

From Kronoberg, the journey to America was far from simple. They started out by wagon to the Swedish port of Karlsham on the Baltic Sea, and sailed for Newcastle, England. From there they crossed England to Liverpool, and boarded a ship, taking steerage class – converted cargo storage that offered cheap but cramped accommodation – to New York or another East Coast harbor. When they landed in the New World, all these immigrants apparently headed straight to northern Colorado, taking the Kansas Pacific Railroad, which in 1870 was finished to Denver in the Colorado Territory. From Denver it was not far to the Boulder-Longmont area, where a bunch of Swedes were taking over.

They did not forget their old home. They called their new settlement Ryssby, and it was established southwest of Longmont by 1875. A Ryssby church (still standing and in use), Lutheran of course, was completed in 1882. The Ryssby Cemetery, adjacent to the church, has grave markers for 31 Nelsons. Only two of those are believed to be closely related to the Zink-Nelson clan: Ruby’s brother, John E. Nelson, and his wife, Estelle Cozine Nelson. Oh yes, the church is located just south of Nelson Road. 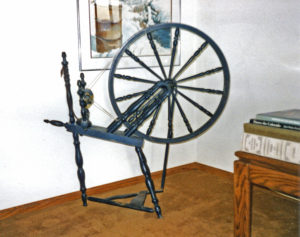 The Nelson family spinning wheel sits in a museum at Colorado State University.

As they packed for the voyage, the Swedes put possessions most valuable and necessary in a so-called “Amerika chest” they had constructed, usually out of wood. Also referred to as a sea chest, or steamer trunk, the Amerika chest is about 3 feet wide, 2 feet deep and 1½ feet high.

Despite the spinning wheel’s bulk, Maria Johannson brought it along. Whether she used it much in the New World is uncertain, but it did survive, and it was passed down through four generations. From Maria it went to John Malcolm’s wife, Myra, then to John Malcolm’s daughter, Amy, then to Amy’s niece, Anne Zink Putnam.

The final three women in that link, Myra, Amy, and Anne, all attended Colorado State University and majored in home economics (or domestic science, as it was formerly called). With that in mind, Anne Putnam donated the spinning wheel to the Avenir Museum of Design and Merchandising on the CSU campus, and it resides in the University Center for the Arts’ annex building.

An Amerika chest that once transported family belongings – possibly the spinning wheel – from Sweden, now resides in a Midwest museum. Heidi Zink, Anne Putnam’s niece, keeps a much smaller box as well as a small copper teapot believed to have been brought by her Swedish ancestors. 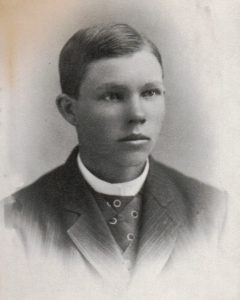 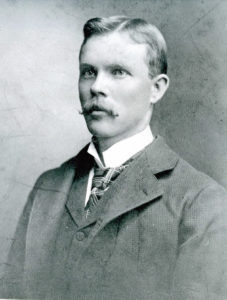 Johannes was a skilled carpenter. Susanna, to support the extended family, went to Leadville where she managed the Mansion House Hotel – owned by her sister Anna Maria’s husband, Lee Spaulding – from about 1878-82.[9] Little John Malcolm lived with his grandparents, Nils and Maya (Maria) during this period. Susanna and Johannes were married in 1882 in Boulder, perhaps so John Malcolm could be properly baptized in the just-built church.[10] They built a sandstone home in Boulder “with an enclosed garden of mignonette, wild roses, buttercup and spider plant, surrounded by a grove of locust trees and an orchard.”[11]

John Malcolm dropped out of Ryssby school after fourth grade, but continued to read and educate himself in other ways. He learned carpentry and built furniture for the home. Later he moved to Denver and worked at a grocery store owned by his uncle, Lee Spaulding.[12]

Susanna died in Boulder in 1904, Johannes in 1908. Their son, John Malcolm, meanwhile, headed for Southwest Colorado sometime after 1900.[13] He worked in the busy mining mills around Ouray and Telluride, then got a job in Ouray at a tobacco/confectionary store that included a pool hall. One of his jobs was to deliver supplies via pack horse to Silverton and Telluride. Taxing and often dangerous work, particularly in the winter.

It was in Ouray where he married Myra Eggleston in August 1908.

So, that’s the Swedish side of Ruby’s equation.

[1] Colorado Families: A Territorial Heritage, published by The Colorado Genealogical Society, 1981, p. 316. Other sources, however, indicate Susanna and Johannes were not married until 1882 in Boulder. One source is “Sweden, Emigrants Registered in Church Books, 1783-1991,” accessed via ancestry.com. Both Johannes and Susanne are listed as “unmarried” at their dates of departure, 1870 and 1872, respectively.

[2] From research done by Heidi Zink.

[5] John Malcolm Nelson will often be referred to in this narrative as John Malcolm or John M. He sometimes went by J.M. or even Malcolm. This is done to help avoid confusion with his father, Johannes, and his son, John Ernest Nelson. And also the Zinks, John J. and John W. That should cover most of the Johns.

[7] Northern Lights: Boulder’s Swedish Heritage. The population statistic is footnoted to Jane Harmon, “Rotter: A study of the Swedish People in Colorado, 1870-1900.”

[12] Ibid. Spaulding was the husband of Susanna’s sister, Anna Maria, who went by Mary.