The Zink line, from Gottlieb to James W.

A child’s world is small. So it’s easy to think that wherever you grow up – Waterfall Ranch, for example – that’s the center of the world. And for you, it is.

But as you get older your world broadens and you attain a wider perspective. It starts to pique your interest when parents talk about their parents’ and other ancestors’ origins.

This is all to say that there would be no Zinks at the Waterfall Ranch without generations of ancestors making important decisions, either because of opportunities or out of desperation. For the Zink tribe, most moves were spurred by the former: opportunity, the chance to come west around the globe, where open, undeveloped land awaited.

Let’s take a look at what we know, and what we think we know. Keep in mind there are many branches leading into the Zink branch, but this is a start to understanding the Zink roots (for a helpful perspective, consult the family tree):

Gottlieb Zink (1731-1802): Gottlieb emigrated from Germany to Philadelphia in 1752, a quarter-century before America would declare its independence from Britain. Several sources have him serving in the City Guard at Philadelphia during the Revolutionary War.[1] He later moved to Abingdon, in southwest Virginia, and apparently lived out his life there, dying in 1802.[2]

(Hint: If you do research you’ll find the name Zink spelled many different ways in Censuses and other documents, which likely comes as no surprise. Zinck is common, and Zinc, and Zenk, and, well, use your imagination.)

Jacob Zink Sr. (1756-1829): Jacob is one of Gottlieb’s seven children. He was apparently born in June 1756 in Shenandoah County, Virginia, but don’t bet the farm on that place and date.[4] We do know he was a German Lutheran minister, and moved around to eastern Tennessee, Virginia, Kentucky and finally to Indiana. He was in Abingdon through most of the 1790s. According to one account found online, which for its detail strikes one as likely factual, his missionary work took him to Louisiana and as far west as Cape Girardeau, Missouri, then a tiny outpost on the Mississippi River. He gave his sermons in German.[5] He died in Washington County, southern Indiana.

Jacob Zink Jr. (1789-1850): Jacob James (J.J.) was born in 1789, apparently in Lancaster, Pennsylvania.[6] He moved around a lot with father and mother, but when he got married he settled in Indiana with his wife, Mary (or Polly), and lived his adult years as a Hoosier. Jacob and Mary moved just a bit farther west, to Hymera, in rural Sullivan County, just south of Terre Haute. It’s not far from the Wabash River, which separates Indiana’s southern border from Illinois.

Jacob and Mary married in 1815, and their first child was Michael, born December 24, 1816, and how convenient, because that’s who we want to talk about next.

Michael Zink (1816-1888): Michael grew up on the family farm in Hymera. He married Clarissa Hughbank in 1837, and they proceeded to have ten children, one of whom died in infancy. (Clarissa was not quite 15 when they got married, but don’t freak out: It was more OK then.) The fifth child is the one we care about, and we’ll get to him in a second. Michael became a prosperous farmer, and was able to establish most of his family on farms in the Hymera area, according to a family history compiled by Howard Zink, a son of John James Zink.[7] Howard added that there are still Zink kin in the vicinity.

James Wilson Zink (1846-1926): OK, that fifth kid. James was born in Spencer, near Hymera, and grew up in Hymera. Interestingly, he was the only boy born to Michael and Clarissa between 1838 and 1856. His closest siblings in age were five sisters. 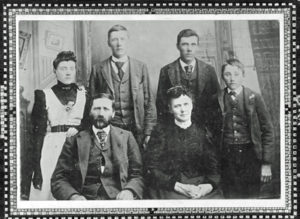 The 1870 Census shows him, at age 24, about a hundred miles northwest of Hymera, working as a farmhand for a family in Camargo Township, in mid-eastern Illinois.[8]

Just the next year he married a Civil War widow, Sarah Jane Grant Britton, who is said to be a cousin of President Ulysses Grant. Sarah’s first husband, Joseph Britton, died in 1864, either from battle wounds or, according to one source, from being shot as a deserter (very unconfirmed!).[9] Sarah had one surviving daughter, Nannie, of three children with Joseph. (See Sarah Jane Grant Zink story for more on her life.)

James and Sarah were married in Spencer, Iowa, a good way across the state from where Sarah and Joseph had lived – Madison County, Iowa. James and Sarah’s four children were all born in Iowa; the first, Martha, was born nine months minus one day after the wedding.

Land patent records show that by 1877 James Zink had established 80 acres under the Homestead Act in Spencer, Clay County. But sometime between 1879 and 1880 the family headed for Nebraska. The five total kids were undoubtedly part of the journey, and that included John James Zink, who is one of the big stars of this show, so he gets his own story.

Apparently this move was larger than just the James Zink family. Howard Zink, in his history, said that James’ father Michael initiated the move to Nebraska, and James’ brother Alonzo came too. In 1880, Michael would have been 64, James 34 and Alonzo 18. Although eventually James and Sarah would settle in Loup City, they first spent several years in Fullerton, in Nance County, Nebraska.[10] 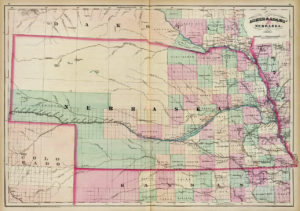 Nebraska in 1874, just seven years after statehood. The western half is very lightly settled.

[1] Among those sources are “A roster of Revolutionary ancestors of the Indiana Daughters of the American Revolution.”

[2] A Little History and a Few Memories, written by Howard Zink, 2001, for the John James Zink family reunion booklet. Howard, a son of John J., credited Maralyn Zink Lenz as the source of his information. Maralyn, the granddaughter of John J.’s brother Clarence, prepared a family history book for a family get-together in Nampa, Idaho, in 1995.

[3] The consensus on several other family trees on ancestry.com is the Gottlieb Zink was from Rodt, which is in the Palatinate region. Another source, findagrave.com, has him coming from Baden-Württemberg.

[4] His birthdate and place – Stoney Creek, Shenandoah County – are in a biography found on ancestry.com. All or most information in the biography, which focuses on his religious service, appears to come from “History of the Lutheran Church in North Carolina (1803-1953).”

[6] Again, this is the overwhelming consensus on ancestry.com.

[7] A Little History and a Few Memories, Howard Zink.

[9] The deserter story comes from a family history written in 1992 by Ruth Zink Duncan, daughter of John J. and Ida Zink.